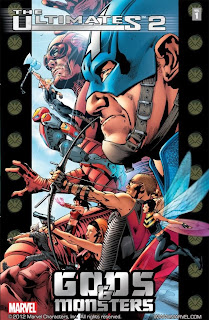 Hank Pym, the superhero formerly known as Giant Man, is still on the outs with the team after his assault on his wife, Janet "Wasp" Pym. She, in the midst of divorce proceedings, has reclaimed her maiden name and, as Janet van Dyne, is dating Steve "Captain America" Rogers, while Hank is reinventing himself as Ant Man and shopping around for a place with a bargain-basement team called the Defenders. Tony Stark decides to share his Iron Man technology with his new fiancee. Bruce Banner is still incarcerated (secretly) by S.H.I.E.L.D. for his murderous rampage as the Hulk, but a leak to the media forces the authorities to bring Banner to trial. With the number of murdered civilians nearing four digits, the prosecution is seeking the death penalty.

Meanwhile, Thor's belief that he's really the Norse god is getting challenged from all sides, and the issue is forced when the team receives strong evidence that he's really just a lunatic with really cool toys. On the other hand, Loki -- if he does exist and isn't one of Thor's delusions -- is a bit more sinister and far more subtle than his mainstream Marvel counterpart.

The Ultimates is, on the whole, darker than the other titles in the Ultimate line. This volume shows even greater maturity, as heroes face consequences for their actions and political maneuverings come into play in both the national and international arenas. Heroes begin to appear in other nations, and their potential use in various global conflicts is a hot topic on every front.

But even as personalities clash and governments rumble into motion, Gods & Monsters provides plenty of costumed action. The clash between the Ultimates and Thor is, in particular, one for the record books. And for laughs, there's the Defenders, where the members have low-budget costumes and, for the most part, nonexistent powers. Still, Valkyrie serves up the cheesecake in spite of the team's overall incompetence.
Posted by John "Zanziber" Rogers at 6:00 AM
Email ThisBlogThis!Share to TwitterShare to FacebookShare to Pinterest
Labels: Reviews