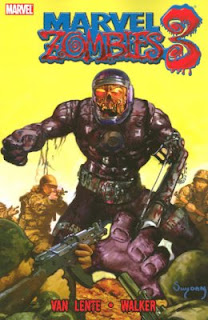 There exist soft spots in our world - where reality stretches paper thin and sometimes unknown forces from outside our universe can slip through.  One such place is a swamp in Florida where a pair of super zombies crawls out of the muck and eat a bunch of hicks.

The official Florida super team “The Command” (sponsored by the Fifty-State Initiative after the events of Civil War) investigates and are quickly dismantled by zombies.  Now it's up to Michael Morbius (the Living Vampire) working for A.R.M.O.R. to discover a cure before our world succumbs to the super plague.  His only hope - to get a living human blood sample from the original dimension of the plague.  Now Machine Man and Jacosta must travel to a world overrun by the evil dead while back at home A.R.M.O.R. is under siege!

Land's covers are not as good as Suydam's, a lot of third-rate characters no one cares about, hefty price tag for only four issues of material, not a big fan of Machine Man's post-Nextwave (Warren Ellis) attitude adjustment

This story ups the stakes by having the super zombie plague show up in the real Marvel universe.  It's short at only four issues (and pricey), but actually written fairly well.  The art is mildly decent, but no major characters are featured which downgrades significance.  Van Lente brings back the horror-movie suspense by offing a few minor characters right in the beginning and setting a creepy tone.
Posted by John "Zanziber" Rogers at 6:00 AM
Email ThisBlogThis!Share to TwitterShare to FacebookShare to Pinterest
Labels: Reviews