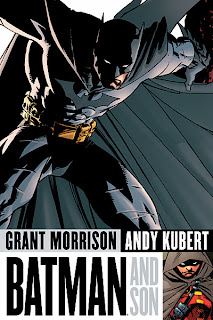 This, in a word, great, though not perhaps the volume I would give a first-time Batman reader (save that for Batman: Detective). Morrison is steeped here in Batman coolness, and there's much to savor--from the straight-up superhero action of the main storyline, the short Joker prose story, the more esoteric "Black Casebook" two-parter, and the final Elseworlds epilogue--but the variety of writing styles might jar a casual reader.

Letting alone, Morrison's writing is at times as super-heroic as it is metaphoric. There's an extended sequence with Batman, Commissioner Gordon, and the Joker in the first few pages which serve more thematically than anything else (where Gordon, in true Morrison style, speaks to the reader), and it's hard to miss the meta-interpretive background when Batman fights ninja Man-Bats in a museum full of pop art.

I was most taken in this volume not by the "Batman and Son" storyline, which has classic elements in its own right, but more by "The Clown at Midnight" and "The Black Casebook." "Casebook"--apparently part of Morrison's larger Batman arc--begins with a match between Batman and a Bane-like figure; Morrison's take on a Knightfall-haunted Bruce Wayne is remarkably compelling. Even moreso is Morrison's new Joker novella, with images by John Van Fleet, which is unquestionable supposed to put one in mind of Morrison's Arkham Asylum. The end to "Clown" comes a little quick, but there are more than enough scary bits along the way.

Morrison has famously referred to his take on Batman as the "hairy-chested Neal Adams love god"; think, perhaps, Bruce Wayne crossed with James Bond, a reference Morrison makes in the story (only, Wayne remarks, "much cooler"). Indeed, the Bruce Wayne here, in relationships both with Talia and new character Jezebel Jet, is lustful--if not loving--and also a bit naive--he can't quite believe Talia would risk the life of her own child.

More importantly, in our post-Infinite Crisis world, we see a Bruce Wayne concerned with things like whether Robin knows that Bruce is proud of him. Whereas previously we had the sense that Batman's partners were a means to an end in his war on crime, we now get the sense that his partners are his end--that is, his war on crime is for the purpose of keeping Alfred, Tim, Selina, and the rest safe. This is a Bruce Wayne, as in the Batman movies, which has a soft spot for people who do good and seems eager to find the good in everyone, and he's far more readable than Batmen past.
Posted by John "Zanziber" Rogers at 6:00 AM
Email ThisBlogThis!Share to TwitterShare to FacebookShare to Pinterest
Labels: Reviews