Solomon Kane: The Castle of the Devil 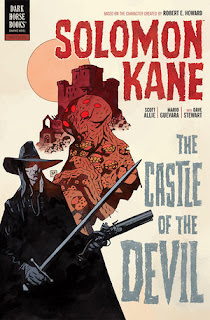 Title: Solomon Kane: The Castle of the Devil

Mike Mignola provides a fine cover for the collection of Scott Allie and Mario Guevara’s Solomon Kane miniseries, which is designed to resemble an old movie poster or trashy paperback cover. It’s a fine cover, but somewhat unfortunate in how poorly it reflects the contents.

Those too are gorgeous, but in a completely different style, making this a graphic novel particularly difficult to judge by its cover (Speaking of covers, when originally published as a miniseries, this one had a lot, and the collection includes them all, including a fine one by Joe Kubert—who Dark Horse should try and convince to do a whole story—and others by Mignola and John Cassaday).

The story stars Conan creator Robert E. Howard’s wandering Puritan warrior character, who resembles in appearance, attitude and capacity for violence the more popular Conan extremely closely, but has somehow never caught on in comics adaptations the way Conan has.

Dark Horse’s Conan editor Scott Allie has adapted this story from a fragment by Howard. The action is set in Germany’s Black Forest, where Kane meets bandits, a monstrous wolf and a traveler of questionable character before journeying to the titular structure.

It’s a castle built upon a ruined abbey, ruled over by a mysterious lord and his more mysterious Persian bride and full of some rather dark and terrible secrets, of a supernatural, or perhaps paranormal, variety.

I found the story took a little too much time to get going, and am glad I read it in trade rather than in its original serial format, as I probably wouldn’t have wanted to read the second issue after the first, let alone the rest of the series. There’s some extremely cool stuff in the book, but Allie doesn’t frontload it, so the folklore-meets-horror aspects (of a variety that should be familiar to Dark Horse’s many Hellboy readers) don’t appear until the second half of the story, or with much force until the climax.

Guevara’s a fine artist, but Dave Stewart’s painterly color art gives the images a milky, gauzy, almost blurry appearance that took me some getting used to. It looks comparable to the publisher’s earlier Conan comics, but I found it rather jarring after turning from the Mignola cover, and I generally prefer harder, darker lines and flatter, more comic book-y coloring.

It’s a very, very violent book, as befitting a Howard-derived comic, although it’s occasionally hilariously so, as when Kane stabs a foe and his organs start to seep out immediately, as if they were spring-loaded by a special effects guy.

At one point, Kane cuts a guy’s face off with a sword, which is something I don’t think I’ve ever seen in a comic or movie, despite all of the comics and movies I’ve seen involving dudes fighting with swords.

Among the foes Kane turns his sword on in this story are a werewolf and monstrous, man-eating “angels.” The former changes shape from image to image, fluctuating between a huge wolf and a more humanoid wolf, which is an interesting take, and, incidentally, the first dramatization I’ve ever seen of the legend of an aristocrat who could turn into a wolf by using a special garment with knowledge learned from the devil. The latter bear many wings and many mouths, and they use all of their mouths when devouring victims, leading to still more rather gory scenes.
Posted by John "Zanziber" Rogers at 6:00 AM
Email ThisBlogThis!Share to TwitterShare to FacebookShare to Pinterest
Labels: Reviews