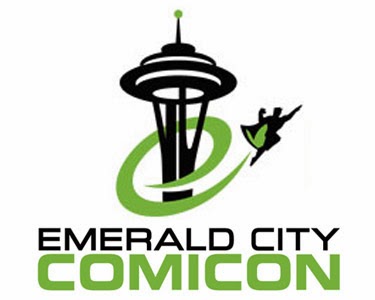 I wasn't able to go to ECCC last year, and I really regret missing being able to finally meet certain talent that I've been a huge fan of for years. This year, I'm looking forward to meeting some artists that I never thought I'd ever get to meet... since I limit myself to comic cons in the Pacific Northwest.

This year's planning has been a bit hectic for me because of some personal setbacks I've suffered. Fortunately I have been able to overcome and am looking forward to also promoting Comic Book Covers 4 Cancer. I have already connected with a few artists that are donating their work to the cause, and hope to possibly connect with some additional artists. One thing I'm looking forward to most in being able to tell Brian Pulido that his idea for the Hero Initiative inspired the project.

Due to Amtrak limiting carry-on baggage to 2, I'm not going to be bringing my laptop with me to Seattle this year... which means that my day-of positing and pictures will be limited. I have an iPad this year, but I'm still working on my picture taking skills with it. I'll probably take more pictures with my digital camera over the iPad for this reason, which means I'll need to wait until I get home before I can post them. Look for my postmortem the first week of April.

With the recent addition of Jim Lee to the guest list... granted he's only going to be there for 2-hours on Friday, and it will be ticketed... I realized that I don't have as much Jim Lee issues as I would like. I found 2 issues I'll try to get signed, but I'm not going to hold my breath... especially since the con opens at 10am and I won't be in Seattle until noon.

A bit of a quandary hit me while writing this, and I pose this question to collectors: If you collect TPB's and GN's like I primarily do, do you take them to get signed, or do you just have your single issues signed? For me, I really only take my single issues to get signed. I do have a couple of my trades signed, but my OCD for collecting makes me keep them in bags with boards. If I were to bring my trade to get signed, I would need extra baggage and possibly someone to help transport them at the con. Since I'm no longer married, I don't have that luxury any more. :-D

For instance, Bill Willingham & Mark Buckingham will both be attending, and I have all the Fables trades. Granted, this would be a far cry from 2012 when there was a guy who brought every single issue of both Fables and Jack of Fables... but I wouldn't want to do something like that to either Bill or Mark, especially considering that I would only be a single person during the entire 3-day long con.
Posted by John "Zanziber" Rogers at 10:11 AM
Email ThisBlogThis!Share to TwitterShare to FacebookShare to Pinterest
Labels: Emerald City Comic Con