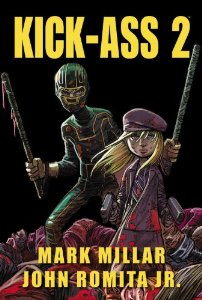 If you only know Kick-Ass from the movie, you don't know Kick-Ass. The comic is a whole other animal, and neither the relatively light mood nor feel-good ending of the film were taken from the original pages written by Mark Millar and illustrated by John Romita Jr. Frankly, I'm not sure how much of this sequel book can even make it to the movie screen -- it's brutal, vicious stuff. Some of the characters, so easy to like under those warm Hollywood lights, have pretty awful things happen to them here, and you might walk away from this book a little sick to your stomach.

That said, it's a sure bet that, if ordinary people in the real world suddenly started dressing like superheroes and tackling villains the way they do here, then this is probably the sort of thing that would happen to them, as well as those around them. Crooks in the real world don't play by comic-book rules.

In Kick-Ass 2, our hero Dave (Kick-Ass) was being trained by 11-year-old Mindy (Hit-Girl) to be a better street fighter -- until she got grounded by her stepfather, who has an unreasonable bias against having his daughter out on the front lines killing criminals. Now, Dave is living the dream -- a member of Justice Forever, a group of like-minded heroes who want to help people however they can.

But then the former Red Mist -- I won't utter his new code name here -- comes back with an army of thugs and a thirst for revenge, and things turn really ugly very fast.

This book is well written and well-drawn. It's a pleasure to read in part because it's not like many other titles on the market -- certainly, you won't see these sorts of developments in an Avengers or Justice League book. Be warned, though, it's not for kids.
Posted by John "Zanziber" Rogers at 6:00 AM
Email ThisBlogThis!Share to TwitterShare to FacebookShare to Pinterest
Labels: Reviews