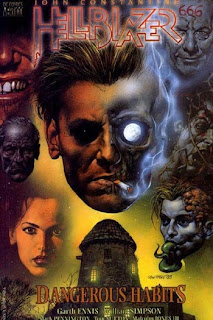 For those unfamiliar with series, it deals with the character John Constantine, a trench-coated Liverpudlian transplanted to London who dabbles -- quite successfully, usually -- in various arcane arts. He deals with demons, consorts with angels, argues with ghosts and generally involves himself in supernatural goings-on that sane people should avoid. If he sounds like someone who'd be fun to know, bear in mind that most of the people he calls friends seem to end up dead ... often under horrible, and likely quite painful, circumstances.

Constantine is also a chain smoker. It was, perhaps, an affectation of early artists; it looks suitably atmospheric to have him lighting up in tense moments or tossing his smoldering butts in the face of danger. But smoking, as we all know in this enlightened age, has its price. And in Dangerous Habits, Constantine -- not yet 40 years old -- learns that he is dying of lung cancer.

Suddenly, his magic doesn't seem quite so magical. Walking life on the edge is one thing, but knowing you're about to be pushed over that edge is another.

Ennis' writing is incisive and passionate, witty and deep. He gives us a Constantine who is at the same time fiercely self-reliant and extremely needy, indestructible and vulnerable, equally insensitive and loyal to his friends. The small touches (like another passenger's breakfast while crossing the Irish Sea and Constantine's final salute to his unwilling benefactors) give the story a kind of breadth rarely seen in comics. And Ennis' presentation of Satan (in various incarnations) and at least one earthbound angel are ... well, somewhat startling.

There are two particularly memorable, emotional subplots in this collection. One involves Matt, an aging fellow cancer sufferer, and the other introduces us to Brendan, an Irish wizard of sorts and a friend of Constantine's who, above all else, loves a good pint of Guinness. (Well, he is Irish, after all.)

Of course, comics are ultimately a graphic medium, and the finest story is lost without solid artwork. Although Ennis' writing would later be better paired with artist Steve Dillon (in later runs of Hellblazer and the even more disturbing series, Preacher), this run was handled admirably by William Simpson. The characters are just to one side of looking perfectly realistic, their facial expressions are vivid and evocative, and the backgrounds are suitable for whatever setting Constantine finds himself in, be it grungy downtown London, rural Ireland or various points of Hell on Earth. Inkers including Mark Pennington, Tom Sutton and Malcolm Jones III completed the picture, making this all in all an engrossing read.

Staunchly religious readers might be uncomfortable with some aspects of the book, and they may find their beliefs handled at times in unflattering ways. Then again, the occult nature of the Hellblazer series should probably keep those readers away in the first place.
Posted by John "Zanziber" Rogers at 6:00 AM
Email ThisBlogThis!Share to TwitterShare to FacebookShare to Pinterest
Labels: Reviews