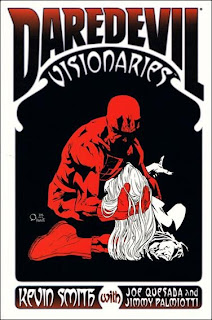 The eight issues collected in Daredevil Visionaries: Kevin Smith are the first eight of Daredevil vol. 2, and they serve less to reintroduce the Daredevil character as to salute him with a sort of medley of fictional themes. Thus we get writer Kevin Smith's twist on every ringer other Daredevil writers ever put the long-suffering hero through, including woman trouble, suicidal urges, lawyeristic mea culpa’s and, of course, a Secret Villain out to Ruin Daredevil's Life. (Where would Daredevil be without the villains that obsess about him enough to destroy him, over and over again?)

And it's all fabulous, because Smith knows exactly what he's doing. The very clichés he employs here in these eight issues are fodder for commentary from him through the characters, and also serve as an opportunity for him to shine by wringing freshness out of stale situations. Often when a villain is out to ruin a hero's life, the hero acts as if it has never happened before; unless continuity comes into play, the hero will exhibit almost complete amnesia about similar situations. Smith is different; he allows Daredevil to muse on the relative effectiveness of the villain at work in Visionaries with the clear-sightedness of someone who remembers his past and can critique it.

The story arc found in Daredevil Visionaries: Kevin Smith spends much of its time in and around the Catholic Church, as Daredevil deals with a mysterious baby who has suddenly landed in his lap. The baby might be the returned savior, or might be the old Son of the Morning, or might be none of these. But people seem willing to kill on all sides, and soon the hero is teetering at the edge of his sanity, tempted to slay a child that might be Satan himself.

Smith, a sort of star guest who came over to write Daredevil after writing and directing Dogma, brings to this comic much the same irreverent humor and genuinely loving keen eye for Catholic detail as that film. In his comic, however, given more time and more characters, Smith provides a more layered and human story. Smith is genuinely interested in questions of faith, and puts meditations on faith in every character's mouth. Daredevil himself is a lapsed Catholic who still inclines towards belief in the mysteries. His mother is a nun, whose only shame is her son, a relationship Smith explores with expert precision in a scene between the two, as mother and son tiptoe around one another, dispensing equal parts rage, shame and adoration.

Daredevil's girlfriend, a DJ named Karen, has just broken up with him for one of those delightfully meaningless reasons that I'm sad to report actually exist. Hers goes something like: 'You love me even with all my faults, which is a very good and generous thing, so I must leave you.' Or something. Anyway, she's outta there and Matt Murdock, the attorney who is Daredevil, wastes about five seconds before he's calling Natasha the Black Widow, an old girlfriend. (This is another dead-level accurate Smith detail.) Natasha here is sexy, sarcastic and not a little bit slutty, although she does have the decency to point out that she'll drop Murdock for Tony Stark any day. Natasha, Smith tells us, has 'embraced the baggage that comes with being human.'

Smith spends a little time with the other side of Daredevil's life, that of attorney Matt Murdock. As someone who actually went through law school, I've always enjoyed the idea of a lawyer so brazen as to go out and commit crimes every night, as Daredevil certainly does with all his trespassing, destruction of property, assaults and batteries. Technically an attorney is an officer of the court, with a higher level of responsibility not to misbehave. I can assure you Murdock flirts with disbarment every time he dons the little red horns. (There's a story I'd love to see, if not write.)

But Smith uses the attorney aspect well: Foggy Nelson, Murdock's partner, is accused of murder, only to have the senior partner (Foggy's mom, no less) fire him rather than bring shame on the firm. At first we can't imagine such a horrible betrayal, but Smith has the senior partner point out that the firm must represent many clients, and any shame Foggy brings on the firm may reflect badly on their clients in court. And lest we think she's just being mean, we're reminded that attorneys have taken a vow to zealously represent their client's interests opposed to each other's. She has fired her son, and ethically, the argument goes, she can do nothing else. There's a lot more to explore here, but Smith has hit on the basic horror of the law: not that it forces you act to like a monster, but like a machine.

It's so refreshing to read Smith's work on Daredevil, which invents little and yet explores the places Daredevil has already been with such freshness and even joy. There's a tongue-in-cheek feel to the whole work, as if Smith can't help but give to his characters the sense that this story, this tragedy, this villain, this fight, is exactly how life for them is supposed to be. Matt Murdock will always be an attorney who feels sorry for himself despite being surrounded by the most beautiful women in the Marvel Universe, and he will always have arch-enemies who seek to destroy him in grand, operatic gestures. In fact, the whole plot of this story arc is actually a comment on one of Frank Miller's. This is a thoroughly post-modern Daredevil.

Visually, Daredevil Visionaries: Kevin Smith reminds me of The Insider in its use of visuals to punch up a story that often stays far clear of action. Most of the action here is strictly dialogue, as characters stand around in various spots across the city. Consequently Joe Quesada and Jimmy Palmiotti give us the most fluid, dynamic dialogue scenes ever, from as many angles as possible, always with the suggestion of breezes to keep tiny parts of the art, hair, clothing, etc. Moving. It's an exciting style.

Daredevil Visionaries: Kevin Smith is a work by a writer who knows his comics and also knows how to drag the world beyond them back into the Marvel Universe. The result is a post-modern treat, and not one to be missed.
Posted by John "Zanziber" Rogers at 6:00 AM
Email ThisBlogThis!Share to TwitterShare to FacebookShare to Pinterest
Labels: Reviews