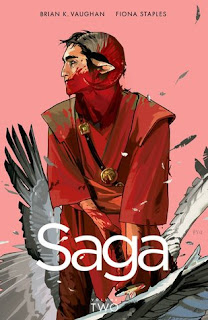 Saga Vol. 1 left off on a completely new direction for the book. Not to say I didn’t enjoy the first volume ─ I loved it ─ but I was a bit wary of how the next volume would proceed. Without spoilers, Vaughan shifted both the location and cast of the story, and those had been the most working elements present. But not to worry. Saga Vol. 2 picks up where the first volume left off in stride, and Brian K. Vaughan and Fiona Staples weave another fantastic tale, without losing the minuscule character moments that kept readers enthralled the first time around.

In Volume 2 we’re treated to the same illustrious cast from before. Marko, Alana, Hazel, The Will, Lying Cat, Prince Robot IV, The Stalk, Izabel, and newcomers Gwendolyn, Barr, Klara, Slave Girl, and D. Oswald Heist are all beautiful in their own way. Let us not forget that we’re only twelve issues into this story, and I’m already capable of discussing these characters by name. You know how you see a movie, and then when you tell someone about it, you say, “Yeah, Emma Stone’s character was fantastic.” Well, if Emma Stone played Izabel in the Saga movie, we would call her Izabel.

In the last review, I highlighted the previous major characters, so now I’ll go into the new ones. Barr and Klara, Marko’s parents, provide some interesting changes to the series construction, as they serve mainly to flip the three-person familial element upside down. Barr is something special, though, and his slow-burn bonding with Alana is something to think about, even after reading. Izabel, introduced in the last volume as a trash-talking teenage ghost, is probably my favorite human character ─ Lying Cat, waddup ─ and if you need a laugh, she’s there for it. Slave Girl, I presume, will be explored further in the next volume, as will D. Oswald Heist, though their brief arcs are nothing to disparage. All in all, Vaughan exceeds at what he did so well in volume one: building characters with enough hilarity and sadness, and with which we can’t help but empathize.

Fiona Staples is even better in volume 2. She was fantastic in volume 1, don’t get me wrong, but a lot of that story revolved around introducing these characters and opening up this fantastical world to the reader. In Volume 2, she gets to stretch her style a little more, and an increase in action and mind-bending twists allow for a bigger showcase of her diverse talents. Staples’ lengthy arsenal is her biggest strength. There’s an anthropomorphic mouse and seal that are adorable. There are demons with upside down heads that are chilling. She does these transitions seamlessly, all while creating facial structures that endow characters with gritty emotions, and it’s all done with absolute perfection.

The only nitpick would be the last collected issue. No spoilers, but it’s underwhelming, and I was left a bit confused as to why Vaughan chose that direction. The series is taking a hiatus between volumes, so it was odd to see issue 12 focuses on a character we’ve never even been one-on-one with. The cliffhanger is solid, though, and I am excited to see where it goes.

Like the last volume, Saga Vol. 2 is a must buy. Yes, it’s not kid-friendly, and some images are incredibly NSFW, but there is nothing like Saga on the stands. The epic storytelling of Star Wars, the comedy of Thursday night NBC, and the subtle brilliance that made Y: The Last Man and Ex Machina something to talk about. Why would you not buy it? Go! Now! Buy it, man. Jeez, why are you still listening to me?
Posted by John "Zanziber" Rogers at 6:00 AM
Email ThisBlogThis!Share to TwitterShare to FacebookShare to Pinterest
Labels: Reviews