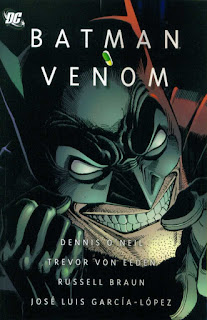 Distraught by his failure to save a little girl's life, Batman begins using super-steroids designed by her scientist father -- which prove addictive and make Batman overly aggressive and unstable. After shaking off the effects, Batman pursues the scientist -- and his partner, a rogue general -- who are using the drugs as part of an unsanctioned experiment to create super soldiers.

The art for Venom is an unusual tag team, with two of the greats -- Trevor Von Eeden and Jose Luis Garcia-Lopez providing layouts and finishes, respectively, and the (to my mind) lesser known Braun the pencils. The result is striking, realist art, though Von Eeden's layouts are maybe not as eclectic as you might expect from him. It's the sort of art that in service of a great, down-to-earth tale would really enhance it. This is a "human" Batman -- who looks like a guy in a suit, more than a mysterious creature of the night.

Unfortunately, the story doesn't live up to the art.

Denny O'Neil is, to my mind, a problematic figure in comics. He's definitely something of a giant, generally respected -- I believe -- both by peers and fans. And I'll admit, I've read some memorable stuff by him (mainly Green Lantern comics)...but my visceral reaction to seeing his by-line is a certain un-enthusiasm. Too often his plots tend to be simplistic, his dialogue unmemorable, and his characterization one-dimensional. And Venom falls squarely into that category.

The premise has potential: Batman developing and then overcoming an addiction. In fact, I had some vague feeling I'd read that O'Neil himself had had a drinking problem long ago, in his youth. If true, you might expect a penetrating insight into the mind of the dependent. But I just didn't really feel we got that. In fact, O'Neil might've been better to have spared a few pages to showing us Batman as a genuinely more effective crime fighter using the drugs -- so that we can understand why he might rationalize their use. Instead, he starts taking the pills...and then we jump three months to when he's basically an uncontrolled vigilante, hassling thugs for no reason.

As in his inaugural LOTDK story arc, Shaman, O'Neil seems to like playing around with time in a way that, in one of the regular Bat-titles, it would probably mess up continuity. The downside is, the numbers don't always add up. At one point there seems to be a five month gap where it's unclear what Batman was doing all that time. Or, even more peculiar, when faced with an obligatory death trap, the stated time frame goes from 24 hours to three days in the space of a few panels!

But the problem with Venom -- and, indeed, many of the longer LOTDK story arcs -- is it just doesn't justify the length. The Batman-addiction thing only takes up the first half of the story, and the plot overall is pretty simple and straight forward. And the villains are one-dimensional, so-evil-they-ooze, bad guys. Maybe O'Neil's sense of morality means he can't bring himself to try and humanize villains, but in a 126 page saga where the villains and their conversations take up an awful lot of page time, we need something more than just constantly cutting to them being evil and sleazy. It's not like mad schemes to create super soldiers are exactly a radical concept in fiction (even Alfred refers to it as "trite" at one point). Nor are the occasional supporting characters any better fleshed out -- the few that arise existing just enough to further a plot point.

In fact, the whole thing seems just a touch...tired. Admittedly, maybe it was fresher at the time (though I doubt it), but it seems you can scarcely pick up a Batman story without it involving Bats being driven "out of control", becoming a more brutal, undisciplined crime fighter. That's the problem -- as I've alluded to before -- with the current vision of Batman as a kind of limited personality type...there's only so many things you can do with him. Perhaps more disturbing is that, even though it's meant as a "criticism" of his actions, writers do it so often, one can't help thinking they kind of enjoy a vicarious thrill writing Batman this way. As well, the basic story is pretty humdrum. After Batman shakes off the drugs, and we're moving into the final confrontation, there's little to really intrigue or excite. There are no twists or turns we're anticipating as the whole thing trundles along predictably.

And there's a looseness and implausibility to the plotting. The very catalyst for the story -- Batman's failure to save the girl -- itself isn't really explained. Why did the scientist arrange the kidnapping and murder of his own daughter? Simply to ensnare Batman in his plans? But how could he know Batman would fail, or that Batman would come to him afterward, or be so emotionally distraught he'd take the drugs -- and why, if you're trying to test super soldier drugs, would you use a guy who's already the most fit guy in Gotham? Part of the story is showing how Batman loses his judgment when he takes the drugs...but in order to have him take the drugs, he has to act like a complete dork to begin with, not apparently noticing how really odd the father is behaving!

There's a kind of emotional vacuum in Venom -- and, indeed, a lot of modern Batman stories. So determined to write Batman as this one-note obsessive, writers like O'Neil fail to give us a complex human being. And O'Neil's bled much of the warmth out of the surrounding relationships -- Alfred now makes a lot of tart wisecracks (that aren't that funny), rather than seeming like he has a real relationship with Batman, and James Gordon insists that Batman keeps their relationship purely business. And, as noted, for a story that (at least at first) is very much intended as a character study -- I didn't feel we got any real convincing insight into Batman or addictions.

Still, I'll give O'Neil props for the climactic death trap -- ludicrously elaborate deathtraps are a staple of comics, but here, O'Neil both justifies it (the villains have a goal in mind) and comes up with a reasonably clever solution as Batman has to think his way out of it (you could almost use it in school textbook: Billy has to apply 800 pounds of pressure to point A, but...).

For continuity buffs, this also introduces the drug Venom that would later fuel the villain, Bane, though strangely, the name Venom is used nowhere but in the title!
Posted by John "Zanziber" Rogers at 6:00 AM
Email ThisBlogThis!Share to TwitterShare to FacebookShare to Pinterest
Labels: Reviews