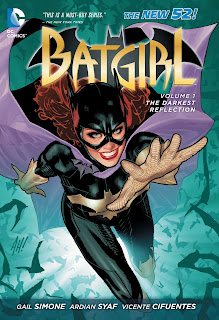 After Barbara Gordon was gunned down by the Joker, fans of Batgirl gave up the idea of ever seeing her don the cape and cowl as the greatest female superhero again. Leave it to DC Comics to find a way to miraculously heal Gordon and give the wheelchair-bound character the ability to walk again.

The publishing giant took their New 52 reboot as the perfect opportunity to get the most famous Batgirl back in the game after being confined to helping the Dark Knight and his many family members behind the scenes as the technologically proficient Oracle. "Batgirl Volume 1: The Darkest Reflection" collects the first six issues of her new adventures.

"Batgirl Volume 1: The Darkest Reflection" is made up of two story arcs. The first one pits the superhero against a revenge-seeking nemesis named Mirror. She must stop the villain from killing people who lived through tragic events. Mirror doesn't believe in miracles and plans to play the role of Reaper. Batgirl goes up against a killer calling herself Gretel in the second tale. Gretel uses her power over the minds of men to force them to do her bidding.

Gail Simone is no stranger to penning tales about the females of Gotham City. Her work on Birds of Prey led to the job of writer for Batgirl. She gives Barbara Gordon the emotional layers the character deserves. They help to get you attached to her and invested in the stories. Simone successfully brings Batgirl back and shows her to be a vital part of the Bat-Family.

Ardian Syaf's penciling adequately provides the images to accentuate Simone's words. His illustrations aren't anything unique but bring the story to life in pictures favorably. Syaf's art is strong visually and pleasing to the eyes.

Fans of Batman's extended family will be pleased to see Batgirl back in action. "Batgirl Volume 1: The Darkest Reflection" shows her in fine form and ready for hand-to-hand combat. Her excitement shines through every page of this book and proves contagious as you discover a craving for more adventures.
Posted by John "Zanziber" Rogers at 6:00 AM
Email ThisBlogThis!Share to TwitterShare to FacebookShare to Pinterest
Labels: Reviews