Serenity: Those Left Behind 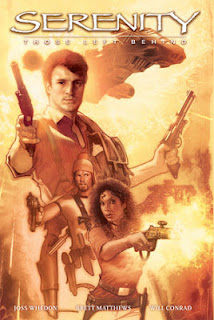 Title: Serenity: Those Left Behind

Joss Whedon's television series Firefly led into the movie Serenity, but that lead was over a broken and unlit path. Along the way, some characters vanished, others faded and a few loose ends tied themselves off without any explanation. Serenity: Those Left Behind sheds light on the path that brought the Firefly crew to the point of the movie's opening scenes.

Serenity: Those Left Behind is strictly a fill-in story, covering material that won't matter or make any sense to series newcomers. But for fans of the sadly abbreviated series, it's a treat, serving as something of a season finale. The art is straightforward and focused on the story.

Will Conrad does an excellent job of capturing not just the actors, but the characters, with every expression and gesture recognizable. The dialogue and story by Brett Matthews and series creator Joss Whedon are unsurprisingly faithful to the spirit and canon of everything that's gone before. And for those who've seen the movie, there's a nice nod towards what's coming next.

Firefly was clearly envisioned as a television series, and even the most faithful comic adaptation can't take the place of the actors, musicians and animation that were part of the series' feel. But Serenity: Those Left Behind is an entertaining chapter in the lives of the galaxy's most outclassed smugglers.
Posted by John "Zanziber" Rogers at 6:00 AM
Email ThisBlogThis!Share to TwitterShare to FacebookShare to Pinterest
Labels: Reviews