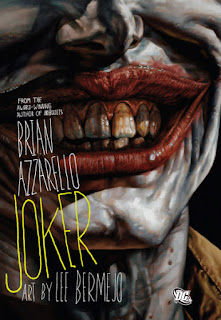 Every superhero needs a nemesis and The Joker has served Batman well over the years. His white face, green hair, psychotic grin and manic laugh have remained something of a constant, making his visage almost as iconic as Batman’s cape and cowl. But he’s also prone to reinvention, with each generation making a darker, more disturbing Joker. Alan Moore’s crippling rapist in 1988′s The Killing Joke became a low water mark in his evil career though. And while Azzerello and Bermejo provide him with a nasty looking carved-in grin, and paint him as a murderous, psychotic bully, he doesn’t quite stoop so low in this violent reworking.

He is, however, a ruthless gangster. Finding himself freed from Arkham Asylum on the grounds that he’s cured (and thus falling into one of superhero comics’ eternal problems – why aren’t these guys just sent straight to the chair?), The Joker returns to Gotham to retake his position as king of crime. In his absence, characters like The Penguin and Two-Face have muscled in on his territory – foolish mistakes they’ll live to regret, as The Joker re-takes his slice of the action, along with a bit more for his trouble. In other words, The Joker isn’t cured – he’s as bad as ever. Now there’s a surprise. Someone at Arkham’s going to lose their job.

All this is seen through the perspective of one of The Joker’s henchmen, Jonny Frost, who quickly rises into position as his right-hand man, second only to silent and undoubtedly deeply disturbed lap-dancing girlfriend Harley Quinn. It’s Jonny’s voice we hear throughout the book, as he learns the ropes of dealing with The Joker and boasts that, through his close bond with the master criminal, he has finally become someone of note.

Azzerello’s take on The Joker deals far more with the politics of crime than we’re used to seeing. We see how he deals with his rivals and why there could never really be a collective union of super-villains, with so little honor amongst these thieves. Bermejo’s darker, grittier take on this pantheon of villains is a stunning job, taking the characteristics that make them who they are and grounding them with contemporary fashions and henchmen. His Gotham is dark, brooding and lawless.

The story is flawed only by its eventual and begrudgingly necessary adherence to the cycle of the superhero story which, while tempered with a different perspective, is necessarily still locked into this three act piece. If you can cope with this, however, we’re sure you’ll agree that the voice Azzerello gives The Joker is a definitive fit we’re likely to hear again. At least until the next time the character goes through a reinvention.
Posted by John "Zanziber" Rogers at 6:00 AM
Email ThisBlogThis!Share to TwitterShare to FacebookShare to Pinterest
Labels: Reviews