Batman: Whatever Happened to the Caped Crusader? (The Deluxe Edition) 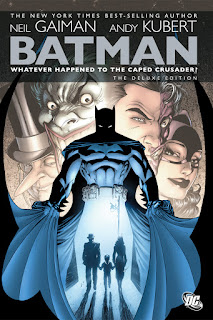 Title: Batman: Whatever Happened to the Caped Crusader? (The Deluxe Edition)

Back when DC Comics was overhauling and re-booting its fictional universe in the wake of its Crisis on Infinite Earths, they commissioned an imaginary "last Superman" story to say good-bye to the Silver Age Superman who was, essentially, being erased from continuity -- "Whatever Happened to the Man of Tomorrow?", written by rising star, British writer Alan Moore.

Jump ahead two decades and DC has decided to do the same for Batman. In this case, there has been no reality altering event (or maybe there has -- I dunno), but in the comics Batman/Bruce Wayne had been supposedly killed off and DC was preparing to unveil a "new" Batman (Dick Grayson, the original Robin, assumed the pointy-eared cowl...though unlike some changes, no one is necessarily suggesting Bruce won't be back eventually). Giving the nod to Neil Gaiman, another British writer whose rise to fame occurred around the same time as Moore's, and serialized across Batman's two flagship series (Batman and Detective Comics -- just as the Superman story was serialized over Superman and Action Comics), we are presented with a "last Batman" story. And wisely, Gaiman keeps it isolated from continuity (even if Bruce Wayne does come back in a few months, this story has a timelessness about it).

This collection also includes a few short Batman pieces Gaiman has written over the years, only one of which I've read...but it was an amusing, self-reflective one from Batman Black and White.

The "Whatever Happened to the Caped Crusader?" story is a surreal affair as Batman finds himself looking down upon a bizarre funeral for himself -- staged in back of a dingy bar, where all his old friends and foes have assembled to pay tribute. Batman isn't sure what's going on, whether he's dead or what -- and is further perplexed when the stories people tell about his life -- and death -- don't match up with each other. The first issue features two longer tales, relating the lives and deaths of two different Bruce Waynes/Batmen, but once we get into the second issue, they're shorthand snippets, generally focusing on different ways Batman died. It's a little as if we're seeing a bunch of unused story ideas for various Batman Elseworlds comics that Gaiman never got to write.

It's a moody, quirky affair, beautifully illustrated by Andy Kubert who eschews much of the sketchy lines or cartooniness I sometimes associate with the Kubert clan, for a richly detailed and modeled style, nicely embellished by the inks and colors. The faces are realistic, while also being expressive. After all these years, Batman doesn't have a signature artist that should've been tagged for the gig (the way Curt Swan was an obvious choice to pencil the Superman story), so Kubert proves a nice choice. He even quirks his style here and there for certain scenes and characters, to deliberately evoke the style of other key Bat-artists, or to present different variations on the Bat-costume, without the changes being too obvious or distracting.

And throughout, the dialogue and phrasing is quite good, the lines clever, quirky, yet not self-consciously so. And I say this as someone with no particular affinity for Gaiman in general.

It's interesting to contrast the Batman and Superman stories. With Moore's Superman -- involving a final showdown with all of Supes foes, in which many friends and enemies were dead by the end -- a violent, "big fight" tale wasn't exactly my idea of the appropriate cap for the Superman legend. Yet Gaiman takes Batman, the prowler of the mean streets and battler of killers and psychos...and presents a strangely gentle, lyrical tale that, in a way, is meant to present a sublime acceptance of mortality -- ala The Death of Captain Marvel -- rather than a bloody final battle with an arch foe. That might seem a strange thing to say in a story presenting multiple deaths of Batman...but it never feels gratuitous or graphic. In fact, given how many writers like to perceive Batman as the dark, grim, even brutal avenger, when Gaiman has Batman reflect on his self-imposed mission, it's: "I protect the city. I rescue people. I investigate crimes. I guard the innocent. I correct the guilty." Nothing about "vengeance" or "punishment".

The story itself may be intended to evoke a 1970s Batman multi-issue arc, in which various villains recounted conflicting tales of having killed Batman. And one of the reasons Gaiman may have avoided the "Batman vs. all his foes" plot is simply because it's already been done, often, and often quite effectively (albeit, with Batman surviving) -- in Detective Comics #526, Batman #400, and Batman: Hush among others. And of course, over the years there have probably been more than a few "imaginary" Last Batman stories, so it's hard for Gaiman to come up with anything that isn't just one more variation on a sub-sub-genre.

I have some mixed reactions to the story. As often happens, the intriguing hook of the beginning (what's happening? what is the explanation for this surreal scenario?) is inevitably kind of let down by the explanation. And the two longer "what if...?" stories told in the first issue are the more developed (even if Gaiman confuses the -- very good -- 1976 movie "Robin and Marion" with the actual Robin Hood legend). Once we get into the second half, the stories are brief snippets, before we segue into the final act of the story as Batman learns the answers and confronts a mysterious woman who had been accompanying him. It can seem a bit protracted. Ironically, I had remarked that in Moore's Superman tale he was maybe hamstrung by his limited amount of pages...Gaiman may have been hindered by having too many pages to fill.

But there is a genuine power to Gaiman's tale -- even flipping through the pages, I find myself curiously misty eyed. Gaiman walks a fine line between sentimentality and saccharine. And he gives one of comicdoms grimmest heroes a bittersweet sendoff that is hopeful and sad at the same time, providing the character something he rarely had in life...a sense of peace ~ "Home is the sailor, home from the sea...and the hunter, home from the hill". And in the end, the point of the various tales, the different versions and faces of the Batman with which we are presented, is to nonetheless expose a core truth of the man, and his character -- no matter the superficial changes in the legend.

It tells us why he is, and always was, THE Batman.
Posted by John "Zanziber" Rogers at 6:00 AM
Email ThisBlogThis!Share to TwitterShare to FacebookShare to Pinterest
Labels: Reviews