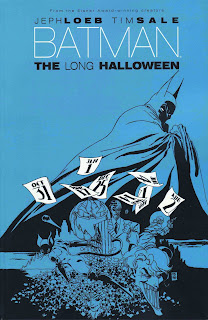 There are a handful of iconic Batman stories, and The Long Halloween is counted proudly among them. This landmark tale written by Jeph Loeb and drawn by Tim Sale captures a side of Gotham that no other story has accomplished.

Taking its lead from Frank Miller's classic Year One story (which, while never so dramatic as The Dark Knight Returns, has far more staying power), The Long Halloween revolves around the untouchable Falcone crime family and the efforts of Gotham's justice triumvirate -- police Capt. James Gordon, crusading district attorney Harvey Dent and, of course, the Batman -- to bring crime lord Carmine "The Roman" Falcone to justice. Their task is hampered by the appearance of a serial killer, dubbed "Holiday" by the media for his propensity for killing on, you guessed it, holidays, who systematically takes apart the Falcone empire.

This dark and noirish story avoids the gimmicks employed by so many Batman writers, instead concentrating on the grim and often frustrating task of following leads, searching for clues and, at times, suspecting friends of terrible crimes. Besides a crackerjack murder-mystery, Loeb has written an exemplary Batman and has set a new high in his characterization of Gotham's peculiar population. Interactions between Batman, Gordon and Dent, as well as his trusty butler Alfred and a colorful array of villains from the Joker, Riddler and Scarecrow to Poison Ivy, Mad Hatter and Solomon Grundy, simply spark with energy and highly believable dialogue. Batman's relationship with Catwoman -- as well as Bruce Wayne's relationship with Selina Kyle -- are particularly well handled with a one-two combination of sensuality and menace.

Sale's art is sometimes not to my taste, and yet for this story it is dark and twisted perfection. (OK, I'm not sure what he's doing with the Joker's teeth, but I suppose he can slide on that one artistic quirk.)

Mystery lovers may squawk because the reader is never actually given enough clues to solve the crime, and the final twist seems to come out of nowhere. Still, The Long Halloween is a classic story that belongs in the permanent collection of every Batman fanatic and deserves to be read by anyone with even a passing interest in the Bat.
Posted by John "Zanziber" Rogers at 6:00 AM
Email ThisBlogThis!Share to TwitterShare to FacebookShare to Pinterest
Labels: Reviews