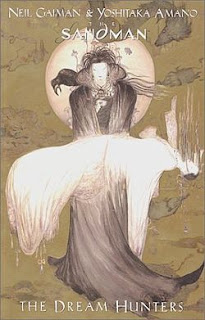 This book is not a graphic novel. Rather, The Dream Hunters is a beautifully illustrated and exquisitely written story of ancient Japan involving magic, love, sacrifices and, of course, dreams. Taken from an ancient myth, this magical retelling is both a Sandman story and a freestanding work all its own, without needing reference or background in the Sandman universe.

The story begins, as so many stories do, with a wager. A badger and a fox wager that whoever can roust a pious young monk from his temple shall have the temple for a home. Despite their efforts, the monk is not fooled, and eventually the wager is called off. The fox goes to the monk and apologizes, an unprecedented move for the fox. The monk is accepting, and the two become friends.

The fox learns of danger to her new friend, the monk, and is determined to save him from almost certain death. Indeed, she travels to far inner spaces, and manages to save the monk from the subtle spell that has been cast upon him. However, the monk is as stubborn as the fox and his own efforts to save her are as just as strong. He travels to the dreamlands in order to bargain for her life, and is beset by dangers of all sorts, without losing his resolve. The ending is unexpected, bittersweet and revealing all at once.

Yoshitaka Amano's illustrations are a variety of media, ranging from etching on gold, to watercolors, oils and pencil sketches. Each illustration is a marvel to be admired on its own as well as adding to the story. I was lucky enough to view his exhibit, which included original paintings for this book, and they are incredibly magical works on their own.

Neil Gaiman's wordsmithing whisks the reader off to a completely different milieu, without leaving us floundering for some sort of context. I especially enjoyed a cameo of two characters from The Dreaming comic book series, and was thrilled to learn that they were actually part of the original myth that this story was based upon.

In all, the experience of reading this book left me trembling on the knife-edge of tears and laughter. I found it to be an emotionally moving experience and highly recommend this book to everyone whether they have previously enjoyed Gaiman's Sandman stories or have never read anything by him at all. Reading The Dream Hunters was a magical experience to be savored.
Posted by John "Zanziber" Rogers at 6:00 AM
Email ThisBlogThis!Share to TwitterShare to FacebookShare to Pinterest
Labels: Reviews