Batman: Battle for the Cowl 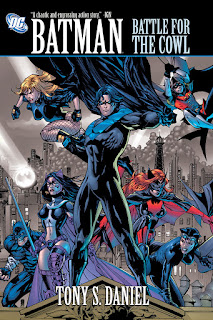 Title: Batman: Battle for the Cowl

Batman: Battle for the Cowl is something of a bridging book. The Batman that generations of fans know and love – the alter ego of Bruce Wayne – has disappeared and presumed dead, after the events of Batman R.I.P. This has thrown Gotham City into turmoil, as everyone from the smallest of crooks to the maddest of super-villains see this enormous gap in law enforcement as a license to grab what they can.

The remaining sidekicks and superheroes, particularly Robin and ex-Robins like Dick Grayson (Nightwing), are left wondering whether they should take over the mantle of Batman. However, while these guys are deliberating on their worthiness to wear the cowl, someone else has taken the opportunity, clearing Gotham’s streets with a brutal and deadly force that would make Bruce Wayne turn in his grave. Who this is and what they’re up to is part of the mystery of this book.

Short and sweet, this pivotal moment in recent Batman history takes up only three of the five chapters in this collected edition but it’s expertly paced, well written and nicely illustrated. Although there are lots of supporting characters they’re fairly incidental, and it’s the bigger names that get top billing. There’s a swelling feeling of youth stepping up that gives the book a real feeling of new beginnings and lifts these characters well beyond their accepted side-kick status.

The supporting material that bulks out the rest of the book is two chapters originally published to book-end Battle for the Cowl – here they’re both presented afterwards. Along with its companion volume, all of this could probably have been brought together to make a good, solid chunk of a book, though I suppose the slimmed down two-volume version at least means you don’t have to buy extra background material if you don’t want it.

So this ends up being an above average superhero tale, despite the fact it doesn’t even contain the Batman we know and love. As an introduction to the next episode in Dark Knight history, however, it’s a solid piece of work. Batman is dead. Long live Batman.
Posted by John "Zanziber" Rogers at 6:00 AM
Email ThisBlogThis!Share to TwitterShare to FacebookShare to Pinterest
Labels: Reviews