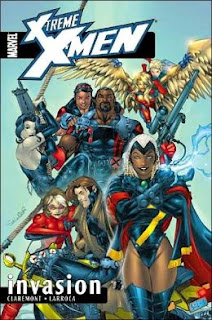 While the first volume of X-Treme X-Men had its qualities it felt a lot like Chris Claremont wasn’t entirely sure where to go with what he’d written, like he’d put himself into a corner. The idea of the diaries was good in theory but the villain Vargas was just too ill defined to be taken as a true threat and the plot kept veering off in directions it didn’t need to go in. Thankfully Claremont’s decision after tying up things in Australia was to put that plot on the backburner and limited himself to the much more direct plot of an alien invasion. Which drastically improved the quality of this arc.

Having linked up with the team after dealing with the events in Australia, Gambit approaches Storm apparently knowing something about a jewel in her possession as they lay low. Well no sooner can you say the words “MacGuffin” than it’s revealed the jewel is key to an invasion and as is Gambit. As both are taken by the invasion’s advanced guard, the X-men pursue the kidnapper to Madripoor, arriving just in time to be trapped inside as it’s cut off from the world by a force-field. With legions of technologically advanced troops storming the island nation, the X-Treme team find themselves as Earth’s only line of defense against an unknown foe. Seven mutants against an armada capable of enslaving entire dimensions.

As with before, Salvador Larroca’s art remains consistently excellent from beginning to end. While there are definitely some problems when it comes to one action flowing into another, they’re still beautifully drawn and inked. Even for characters which have been around for decades this is the best they’ve looked in a long time. The only time it ever has any problems is with the character of Lifeguard (yes they do make fun of the name) with a changing appearance, but that could easily be put down to her powers.

The story itself has much more of the focus, pacing and concentration upon the action which Volume 1 lacked. While there are breather moments in combat and quiet bits, these are installed at key points within the plot and you never feel they’re out of place or getting in the way of things. Many actually offer some surprising moments of characterization such as one newly activated mutant beginning to regret his choices and asking if the X-Men’s lives are “always like this?” It adds moments of humanity which tend to be missing in a lot of stories or are mishandled by certain authors (Millar, Bendis, looking at you) even if it can come across as slightly hammy at times.

Unfortunately at the same time it could be argued that it sometimes moves too fast. There is a very abrupt beginning in which we have information both delivered via flashback and as events move, which doesn’t seem to gel very well. While it goes a considerable way to get the story moving quickly the start can be jarring at first and is unlike something you’d expect in a modern comic.

For the majority of the book the action with the X-Men trying to stem the tide really works well. You get a sense of the sheer power and scale of the invasion very early on. While only running battles are seen rather than full blown engagements, the local military is thoroughly beaten down every time and the victories the X-Men make never seem to do enough impact. Well, at least up to the point where Rogue cuts loose, but explaining that bit would ruin one of the story’s major highlights and shows just why the X-Men are quite capable of taking on alien invasions without serving as backup to the Avengers.

The 80s style writing continues here, giving it the same sort of clunky charm the last book had but it feels far more appropriate and as if the style is being used well. Some noticeable flaws remain such as many newly introduced characters being ill defined, especially in light of how strongly the main team-members are written in this. While the recently introduced Lifeguard and Slipstream actually come off well, many of the similar villains seem extremely generic or we are given little more than a name. This is especially unfortunate because the main villain, Khan, has an interesting idea behind him and feels like he could have been truly fleshed out into an interesting reoccurring villain or at least someone who could be remembered for a few years. When much what little of his motivations the comic delves into are revealed, he comes across like some lesser version of Warhammer 40,000’s Emperor, leading his forces on a continual crusade for unity. It’s just a shame a lot of this is put to one side to emphasize upon a possible relationship with Storm.

The final thing to truly note is that the arc actually ends on something of a positive note. While it’s made clear that their victory is a costly one, and affected some of those involved more than others, it doesn’t try to crush any feelings of positivity to make what happened feel as grim and pyrrhic as possible. The comic still makes it clear there’s been a victory and their adventures will continue rather than endlessly beating the heroes into the ground and trying to make the universe darker and darker at every turn.

This isn’t an arc I’d recommend to everyone but if you’ve got some basic familiarity with the franchise and are willing to ignore a few unexplained details this is an okay read. While definitely not something to seek out at all costs it’s definitely worth picking up at least once, reading over a few hours and then (probably) forgetting about it. If you’ve disliked how the X-Men have been portrayed as villains constantly of late and how Marvel seems to be trying to force every single last outcome to an event to be as bleak as humanly imaginable this one might be worth looking up.
Posted by John "Zanziber" Rogers at 6:00 AM
Email ThisBlogThis!Share to TwitterShare to FacebookShare to Pinterest
Labels: Reviews