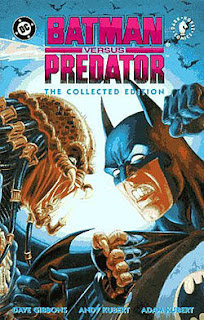 Predator, the big-screen alien hunter licensed to Dark Horse, made a leap into the DC Universe and Batman's Gotham City in this highly successful crossover tale. Appropriately grim and gritty in its art, Batman vs. Predator is a monumental showdown between champions.

But the Predator doesn't make a beeline for the Batman, of course. Seeking the most powerful prey, it first targets the city's celebrated prizefighters before setting its sights on crimelords and politicos (and one hapless junkyard dog). Soon, however, it realizes where the real power in Gotham lies -- the Batman.

The Batman usually makes crimefighting look easy, but he's more than met his physical match here. Severely injured in the first round, Batman is helpless as the Predator cuts a vicious swath through Gotham's powerful elite. The alien beast eventually focuses its attention on one of the city's best take-charge kind of guys, Commissioner Gordon -- and that threat signals Batman's return to the ring.

The tale laid out by Dave Gibbons, illustrated in vivid darkness by Adam and Andy Kubert, is a masterpiece of the genre, one of the best company crossover books I've read. More than a decade after its initial release, Batman vs. Predator is still at the top of its game. Prepare yourself for a fight to remember.
Posted by John "Zanziber" Rogers at 6:00 AM
Email ThisBlogThis!Share to TwitterShare to FacebookShare to Pinterest
Labels: Reviews