With the recent release of The Walking Dead #115, I wanted to get some of the blank covers for use in the Comic Book Covers 4 Cancer (#CBC4C) project. 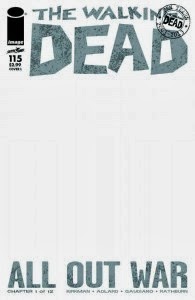 Fortunately, my LCS was able to secure 4 copies for me... but with the news that #115 was selling out everywhere, I thought I should get as many as I can for the project. So, I turned to the internet to help me and I used 3 different online retailers that I've used in the past.

Within 30 minutes of making the decision to procure more blank covers, I had placed orders with Things From Another World, Midtown Comics and MyComicShop (aka Lone Star Comics). I thought this would be an ideal time to critique each service. All orders were placed on Friday, October 11th.

I've only ever had 1 issue with TFAW, and that was all because I misunderstood their policy about multiple covers.

As regular readers of my blog already know, I have an affiliate account with MyComicShop so that I can earn credit on orders placed using my affiliate link.