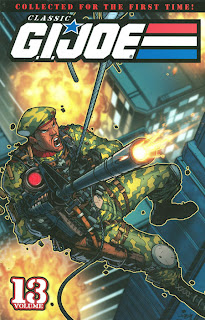 There are equal parts goodness and stupidity sprinkled throughout the issues in this book. Some ideas, like Firefly being a ninja, are totally stupid. Others, like the assault on Cobra Island, are great fun. There are no hard and fast rules on where the goodness and suckiness occur.

Issue 125 was a split issue not unlike what John Byrne did back in Fantastic Four #277 in 1985, where he used two existing subplots and assigned them a top and bottom arrangement throughout the issue. Issue 124 was split in three parts across each page in much the same way. Larry Hama is a good writer when he is allowed to cut loose and have fun like he did in those two issues.

There are some ideas in these issues that really, really suck, such as the G.I. Joe Eco-Warriors and Cesspool and his sludge weapons. There are some good ideas, too, like shifting the focus on the series to Snake Eyes again. Snake Eyes was the first G.I. Joe doll that I got back in 1982 at age 9 (I'm talking pre-swivel arm battle grip Snake Eyes, folks), and was always my favorite. The only problem with him is that he cannot speak so you need someone such as the now-good guy Storm Shadow to relay what he is thinking or meaning to say to others. It gets tiresome quickly.

There are some fun action sequences, but much of this book was marred by the Image influence in the artwork department. Image was a big deal at that time, and every artist was scrambling to incorporate that razzle dazzle into their style. I blame the Image artists for the speculation boom that nearly destroyed the entire industry.

So yeah, the series is going down the tubes by this point, having long since lost its focus and is weaving and bobbing about. I am well into Volume 14 as I am writing this, and it is apparent that the train has gone off of the rails. Will things get back on track by the time that the original series end in Volume 15? Time will tell.
Posted by John "Zanziber" Rogers at 6:00 AM
Email ThisBlogThis!Share to TwitterShare to FacebookShare to Pinterest
Labels: Reviews