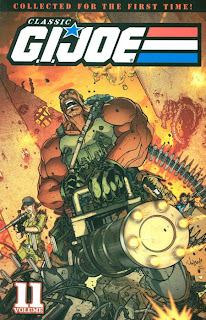 G.I. Joe isn't very realistic at this point in the title, with the far flung fantasy elements (science fiction, ninjas) getting as much attention as the military elements of the series. I was admittedly a sucker for this back when I played with the toys and read the comic books. I was no longer buying comic books when these issues were originally published, so these were all new to me. There is a sense of fun amidst all of these goings on. There is also a sense of reality, as seven Joes meet their maker in issues 109-110. And no, I'm not referring to Hasbro.

Larry Hama's writing is a precursor to modern comic book storytelling. Unlike his contemporaries, Hama did not use third party narrative captions to set scenes. He would list a location or a time and then cut to the dialogue. This is pretty much standard operating procedure at Marvel over the last decade, but Hama might very well be the first to have done it. I'm not a comics historian so I can't say for certain. The artwork is done by a rotating crew, and is solid throughout the book. Clear, concise, competently done artwork. Mark D. Bright does the bulk of the book (101-106 and 108), and I enjoyed his run on Iron Man.

This was a fun escapist read. I'll admit that G.I. Joe is pure nostalgia for me, as I played with the toys, watched the cartoon series, and read the comic books in the '80s.

There is a marked improvement in the overall restoration in this book over previous volumes. While there are a few IDW-created typos found in the word balloons, greater care seems to have been taken this time around than with the previous volumes. There doesn't seem to be much in the way of pixelated lines. The strangest thing is the uneven lines on the top of the panels on some of the pages. My best guess is that these were scanned from floppies that were stored in extremely humid conditions and had the rippled warping that accompanies said humidity.
Posted by John "Zanziber" Rogers at 6:00 AM
Email ThisBlogThis!Share to TwitterShare to FacebookShare to Pinterest
Labels: Reviews