Fables: Werewolves of the Heartland 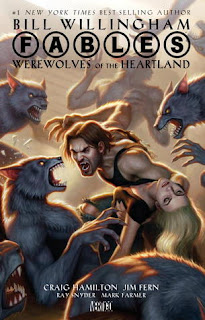 Title: Fables: Werewolves of the Heartland

Bigby Wolf embarks on a quest through the American Heartland to find a new location for Fabletown, a secret society of exiled fairy tale characters living among the "mundys." In his wanderings, Bigby stumbles across Story City, a small town that seems to be occupied solely by werewolves. Oddly enough, they seem to already know and revere Bigby, but at the same time they've captured and caged him.

FABLES: WEREWOLVES OF THE HEARTLAND tells an epic tale that began well before Bigby Wolf set foot in the bucolic plains of the Midwest. It began long ago when he served in World War II and became mired in a Nazi experiment that would change nations. It's soon evident that murder in Story City is the least of their sins, and unraveling the town's many mysteries may cost Bigby, the seventh son of the North Wind, much more than his own life.

First a warning - this is a violent, gore fest more often than not.  Bigby isn't a subtle man to begin with and these folks pissed him off something bad and he lets loose on them.  Also there is a lot of nudity running around these pages.  Male and female.  I wouldn't call it explicit persay--girls are obviously girls, guys are obviously guys, but it’s pretty clinical overall.

FABLES remains one of my favorite comics and barring something slipshod editor deciding to butcher it, that's not likely to change.  I've looked forward to this book for a long time mainly because Bigby is my favorite character, bar none (save Snow White and Cinderella), and it promised to give us a bit of back story on the man behind the wolf.  In that it didn't disappoint.  Bigby has spoken of his time in WWII, when he helped out the Allies (unofficially) to stop the encroachment of the Nazis, but in this he reveals just what he did exactly.

The art isn't anything to write home about, its not up to the usual standards of the comic and part of that may be because most of the story arcs had one artistic team (inkers, layout, pencils) throughout.  WEREWOLVES has numerous inkers and in a comic book that can really fudge up the artwork.  From a reader's perspective, it made folk hard to tell apart (I kept mixing up Diana and Oda, or Alwin and Carl for instance, which in turn confused me as all four had separate agendas more or less).  The werewolves, whether intentionally or not, were all colored basically the same so even though Bigby was going through them wholesale at one point, I had no idea who was dead and who was not.

Story wise this was an interesting conundrum for Bigby.  He kind of helped create the mess and was at a loss as to how to finish it.  Technically no one in that town is a true Fabletown resident.  None of them came from the Homelands, or were born from parents who fled the Homelands (such as Snow and Bigby's children), and thus the charter didn't cover them.  On the other hand they weren't exactly Mundys (humans).  He basically let it play out, hoping for a graceful outcome, but knowing the outcome would be far worse then anything he wanted to find.
Posted by John "Zanziber" Rogers at 6:00 AM
Email ThisBlogThis!Share to TwitterShare to FacebookShare to Pinterest
Labels: Reviews