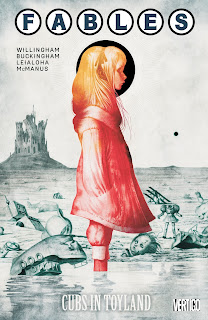 For those not familiar with Fables, the basic premise is that characters from fairy tales, fiction, nursery rhymes and the like really exist, originally in their own world, called the Homelands.  Eventually, due to the machinations of the Adversary, they were driven out of their native lands and settled in our world.

Things are not completely as we know them to be, as Willingham has manipulated things (fairly excellently) to incorporate separate tales into one big, intertwined, twisted, beautiful, creepy, funny story.  If it sounds like I’m gushing, it’s because I am.  Here’s a “for example”.  Snow White and the Big Bad Wolf (who can transform to human form and goes by Bigby) are married.  Bigby is the same wolf that appeared in both The Three Little Pigs and alongside Little Red Riding Hood.  So, yes, he can blow a mean gale-force wind.  Well, that’s because he’s the son of the North Wind, duh!  And, don’t worry that you’re going crazy, Snow White and Prince Charming were married, just like Disney told you.  But don’t forget that Charming also was with both Sleeping Beauty and Cinderella — that all holds true — he’s a philanderer and has been married (and subsequently divorced) to them all.

It doesn’t just stop there, though; the layers upon layers are just fantastic to watch be built.  If you’ve got a favorite character, chances are he/she/it has been in here.   And not just as a cameo — Willingham has an uncanny ability to give these characters are voice, even when they’re around for just a bit, you want to know more.  It’s not even just the characters.  Concepts — Arthurian legend, Super-heroics, The Fisher King — are sneakily attached to characters and story arcs.  In the Fables spin-off, Jack of Fables (centered around Jack, who is the same guy in all “Jack” stories, — Jack Horner, Jack and the Beanstalk, Jack Frost), we get the Literals, who are the embodiments of actual writing techniques — the Pathetic Fallacy, Deux ex Machina, the Genres — and somehow it all makes sense.  Fables is one of the consistent great books out there and if auteur theory is true, then Willingham fits the bill.

If you’ve been reading this and think, “Well, that sounds somewhat like that show Once Upon a Time!”, you’re not too far off.  Fables did at one point have a television pilot ordered, for which a script was written, at ABC.  Yup, that same studio that does Once Upon a Time.  Although Willingham has denied that there was any maliciousness, it’s hard to not see the inspiration.

This trade, collecting issues #114-123, encompasses two story arcs.  The titular story takes up the majority of the trade (#114-121) and is a bit of a character focused story, as compared with the big world evolving tales that happen every second to third arc.  These stories are probably more accessible and don’t require as much knowledge of the previous 100+ issues, but despite past successes, I always expect less excitement in these type of stories.  Add to that, this character arc deals with Snow and Bigby’s children who, despite some recent developments, have been more annoying than interesting.

The first part of the prophecy came true in the previous trade, as the eldest child, Winter, became the new North Wind.  This arc results in two more of the aforementioned prophecies occurring — I won’t spoil which ones (though there may be some debate as to which came true) — and they happen in a really touching way.  Therese, the shyest and most introverted of the cubs, starts out our journey after being given a boat as a gift at Christmas.  When she discovers that the boat can talk to her, they go off together on a trip to the far-away Toyland.

There, she encounters a broken-down world populated with broken-down toys, all proclaiming her as their new queen.  It’s slow moving, but for a purpose — Willingham is setting the mood for what starts off as a creepy, are-they-bad, type of story and changes into a redemption story.  It’s really well paced and, though the story takes place mostly in a place never seen before these issues, Willingham spends ample time developing the location and these new characters.

Okay, now a moment about Mark Buckingham’s art.  Just look at the one single page above.  He captures disgust and boredom in Therese’s face, details in the landscape, and horrific realism in these beat up, broken, discarded toys.  His work is also spectacular and complements the tone of this book.  Yes, it’s a story ultimately about fictional characters, people, animals, and otherwise, but his art is just the perfect amount of realism mixed with fantasy that this is all believable.  Buckingham also has been illustrating the side gutters since the start of the title, a little bonus in terms of the visuals, but it works to contain the setting and mood of the story.

The second arc of the trade, printed in issues #122 and 123, is titled The Destiny Game.  Right off the bat, the most striking difference is that the art is not by series regular Buckingham, but rather by Gene Ha of Top Ten fame.  It gives this story a completely different look, a bit darker (which is strange, given that The Destiny Game is not nearly as morbid as the Toyland story).  It’s a story told in the future, narrated by another one of the cubs, telling a bit more history about Bigby.  Not as interesting as the first part of the trade, but it works to add depth to the Fables framework.
Posted by John "Zanziber" Rogers at 6:00 AM
Email ThisBlogThis!Share to TwitterShare to FacebookShare to Pinterest
Labels: Reviews