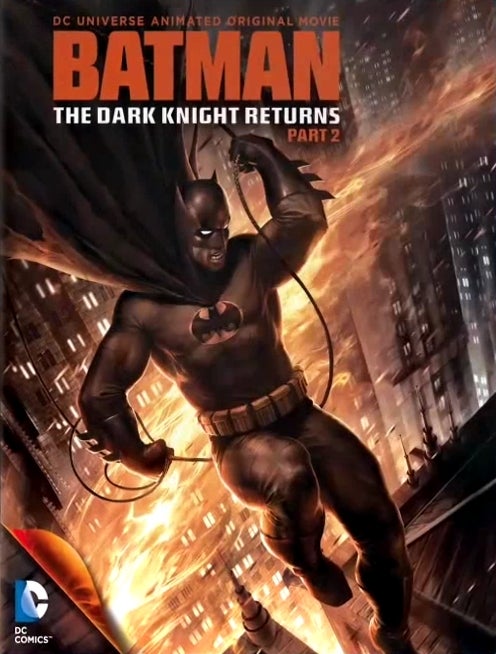 The Dark Knight along with new sidekick Robin have finally reclaimed Gotham City and allowed a ray of hope to penetrate the reign of terror that The Mutants had cast upon his city. With Batman back in the spotlight the extended media coverage has awoken a far worse evil at Arkham Asylum the Joker! Forever destined to be mortal enemies The Joker has a diabolical scheme that may pull Batman down to the darkest levels of insanity. While on the horizon a global catastrophe races towards Gotham and with it comes a familiar face The Man of Steel though this time he has Batman in his sights. Witness as the aging Dark Knight wages a tireless war against crime while proving that courage and will are indeed timeless.

Taking up right where the last release left off, this one picks up in the wake of Batman’s defeat of the Mutant gang which terrorized Gotham citizens. Many of the youngsters have now taken to preying on criminals, often in a harsh and fatal manner, and calling themselves “The Sons of Batman.” The movie opens with Galaxy Communications President Lana Lang debating the virtues of Batman’s return on a live talk show, which is being viewed at Arkham Asylum by The Joker, who’s found a reason to smile after several years in a catatonic coma. Joker laments to his psychiatrist Dr. Wolper (Michael McKean) about not really having a chance to tell his side of the story regarding Batman, so the Doc decides to book Joker on the David Endocrine show.

Right about the same time, a ceremony takes place where Jim Gordon (David Selby) officially retires as police commissioner and passes the position to Ellen Yindel (Maria Canals-Barrera), who makes her first act to issue an arrest warrant for Batman on criminal charges. Meanwhile, in Washington DC, The President speaks to Superman (AKA Agent Kent) about bringing in Batman since all superhero activity is now banned in the U.S. Superman (Mark Valley) says he’ll do his best.

Eventually, Clark Kent meets up with Bruce Wayne to discuss Batman’s retirement, how and how someone will likely order Superman to finally take down Batman once and for all. Bruce simply says when that happens, “May the best man win.” Clark flies off as he’s called to help American forces fight Soviets invading the South American island called Corto Maltese.

A lot of things are set up here. If you’re a fan of the original graphic novel, you’ll likely enjoy this movie despite some of the changes. The Joker’s escape is handled in a rather shocking and creepy manner. TV host David Endocrine was originally done up as an obvious parody of David Letterman, but here he’s drawn more like Conan O’brien, who voices the role here. Michael Emerson (Person of Interest) does The Joker with a subtle nastiness. I know many of you will be likely comparing him to Mark Hamill’s performance over the years. Emerson sounds like a subdued killer clown (compared to Hamill’s rendition) who’s been wanting a reason to feel alive again and you see this in full during his battle with Batman. Peter Weller meanwhile, plays off him and everyone else well as Batman, who comes off nastier than ever even as Bruce Wayne. The only time his voice doesn’t quite perform well is during an address to The Sons of Batman at one point, but he’s still pretty good.

Another performance that’s fun to hear is Jim Meskimen as The U.S. President. If you read the comic, it’s rather obvious he’s drawn up to be a parody of President Reagan, and Meskimen plays this aspect up perfectly. It’s weird not to see this performance listed on IMDB.com, but he’s definitely a highlight here. Actually, everyone does pretty well here thanks to voice director Andrea Romano, but these voices were the ones who stood out most.

There’s also the overall direction here. I felt the pacing for Part Two (covering issues 3 & 4 of the comic series) wasn’t quite as good as for Part one, but the big events that are iconic to this story do play out with style. The eventual battle between Batman and Superman is truly epic. Director Jay Oliva takes advantage of the fact he’s got the two biggest heroes in comic history going  at it and he makes the most of this opportunity, making the action an all-out slugfest, more devastating than the comic could depict. In this and other action scenes, Oliva delivers handily.

So we come to the end of waiting for this mythos-changing series to be adapted. As with any other production, there are some changes but the story is still effective and worth purchasing. The DVD & Blu ray will contains some cool extras like a look at Batman and Superman’s relationship, and a decent selection of episodes from the Batman animated series. Very hapy to see this includes “Legends of The Dark Knight” which shows the first animated version of The Dark Knight Returns. There’s also a preview of Superman: Unbound which adapts a Geoff Johns / Gary Frank comic about Superman and Supergirl’s first encounter with Braniac.

To anyone who reads this wanting to see a complete ending to Batman’s career, you could read the comic or buy this movie (and the first part of course). Either way, you’re in for a pretty good time.
Posted by John "Zanziber" Rogers at 6:00 AM
Email ThisBlogThis!Share to TwitterShare to FacebookShare to Pinterest
Labels: Movies, Reviews