"The Ocean at the End of the Lane" signing in Portland, OR

On, what was, the hottest day of the year so far in Portland, the moment I had waited for all of my adult life had finally arrived. Even though the Crystal Ballroom was not ventilated very well, I and about 900 other fans of author Neil Gaiman persevered the heat for the opportunity to see, hear and meet the man himself. Even though the heat was uncomfortable, it was well worth it. 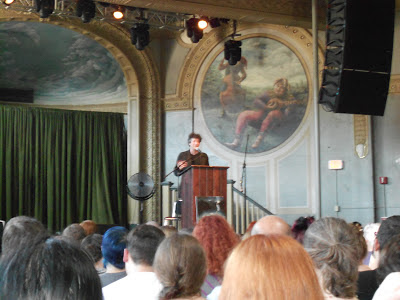 I was introduced to Gaiman's work in my senior year of high school when I picked-up a little comic book called Sandman. From it's pages, I was transfixed and enamored by his words. I feel it was at this point in time that the mantle of my favorite author had changed from Stephen King (who I had idolized since I was a child in 5th grade) to Gaiman.

Gaiman first read to us from his new book, "The Ocean at the End of the Lane". Chapter 3, to be accurate. 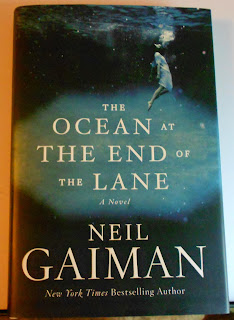 While waiting to enter the Crystal Ballroom for the event, one of the employee's from Powell's stated that the copy of the book we would be receiving was "free", even though it was obviously covered by the price of admission.

I found Gaiman's voice to be very soothing, and helped me to set aside the uncomfortable heat.

After the reading, Gaiman fielded question that the audience had submitted before the start of the event.And once that was over, he read a chapter from upcoming children's book "Fortunately, the Milk". While I have no children of my own, I look forward to reading this book dedicated to father's.


Once the reading had completed, Gaiman took a break while the Powell's employee's worked to setup the signing area. Everyone was given a colored slip of paper in their copy of "The Ocean at the End of the Lane" with a symbol on it. This would denote the order in which people would be called to the signing area. Mine was a blue star, and even though I was there early, I still had to patiently wait for about 5 other groups of people to have their books signed first. It was good that they played music and I had friends to spend the time with.

Once my blue star was called to be signed, the moment I had waited for all my adult life was about to happen. I was finally about to meet one of my favorite authors. (I wish my other pictures that I had taken had turned-out, and that the best of which had turned-out better, but this is what I was able to salvage.) 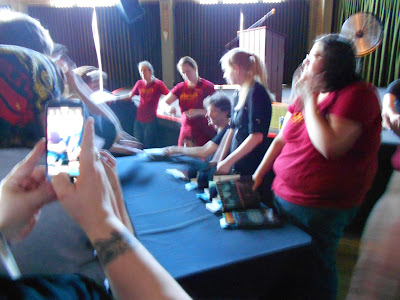 Here are the latest additions to my collection of books and comics that have been signed: 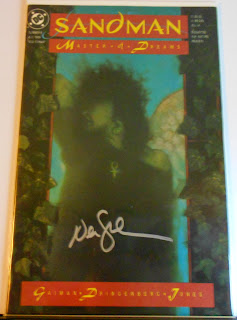 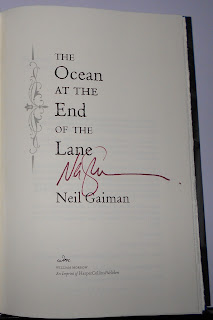 As I labored to get to sleep, much later in the evening, I found myself thinking about my parting words to Gaiman. I've found that I have actually been saying the same thing to every author and artist (though altered a bit for artists) when they sign my books. I have to credit Kevin Smith's movie "Mallrats" for inspiring what I now consider my tagline: "You keep writing them, I'll keep reading them."
Posted by John "Zanziber" Rogers at 9:41 AM
Email ThisBlogThis!Share to TwitterShare to FacebookShare to Pinterest
Labels: book signing, Neil Gaiman