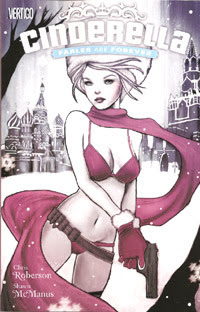 Fabletown’s own James Bond is back with her second trade, Fables Are Forever. It’s a fast paced, action/adventure tale as our heroine goes head to head with one of the most notorious Fable assassins, Dorothy Gale. That’s right. You’ll never see Oz quite the same way again.

Now this is fun, almost distractingly so. The truth is I couldn’t read a chapter without a growing sense of gravitational cognizance. If you’ve ever watched a Warner’s cartoon, you’ll know what that is. Everything is fine until you look down. If you look down you’ll realize you’re standing in mid-air with nothing for support. Once that happens you can only fall. Obviously I had problems with the book.

Starting from least to worse, let’s look at that cover. Yes, it’s the Russian swimsuit edition, but more than that it’s the least interesting of the covers from the series’ monthly edition. Couldn’t Vertigo chip in for an original cover? After all, this is the edition people are going to be buying from now on.

Secondly, this isn’t a long story. Not really a book length one. They could have gone with that and given us a shorter book at a lower price, or they could have included some interesting extras, or they could have recycled a Cinderella story that has already been collected into a different trade edition and has most likely already been bought by Fables fans in both monthly and trade format. Guess which option they went with.

Finally, and most importantly, this book represents a major retconning of the Fables backstory. One done for no other reason, it seems, than to rationalize this story. As fans know the setup for Fables is that an evil Adversary has taken over all the fairy tale kingdoms and now there is a hidden community of fairy tale characters, who refer to themselves as “fables,” living in Manhattan. This community also supports a second community of non-human fables who live in a large “farm” in upstate New York. They are forced to live there because they can’t pass as human. Eventually, they do defeat the Adversary and another chapter of the story begins, but with Cinderella: Fables Are Forever that’s all given a major re-write. Now there are “shadow communities” of fables all over the world. In Russian, China, Burkina Faso. And the different communities are actively engaged in a Cold War, pitting one against the other. It’s easy to see how this benefits Cinderella. What’s a Cold Warrior without a Cold War? But this isn’t the first Cinderella Secret Agent tale and the others have been engaging and fun and placed entirely within the context of accepted continuity.

Instead of developing the Fable universe further, it just raises a lot of questions—Why are these fables at war with one another instead of joining against their common foe, the Adversary? Why haven’t we heard of any of this before? Aren’t all fable communities “shadow” communities?—questions that all seem to have the same answer: now, they’re just making stuff up. I don’t know, with all the talk of creator’s credits and the Avenger’s movie maybe we can blame this on Stan Lee too. After all, he’s the one who taught comic readers that continuity was important.
Posted by John "Zanziber" Rogers at 6:00 AM
Email ThisBlogThis!Share to TwitterShare to FacebookShare to Pinterest
Labels: Reviews