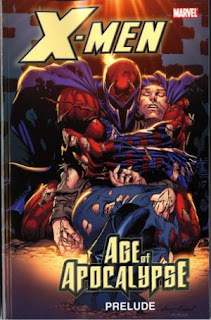 Out of all the comic books I've ever read (not as many as some but still a fair old few) why is it the 'Age of Apocalypse' series is the one that has always managed to occupy pride of place in my head? I mean, there are definitely better series out there

'I don't know' is still the honest answer. It's probably a cross between my picking the books up at a time when college life suddenly got a lot better (it had been pretty bad at one point) and the series being a whole world away from the X Men cartoon I'd made a habit of watching. All of a sudden anything could happen and I wanted some of that action!

I didn't stick with the X Men books for that long, just long enough to see what happened with the Onslaught storyline, but I've always had a little soft spot for the 'turn everything on its head' madness of the 'Age of Apocalypse' books. The collected editions are very much on my 'to buy list', once I can pick up copies without crippling my wallet... I can wait :o) I had never really given much thought to what led up to the main event, too busy being blown away by the good stuff, but something had to kick it all off... I finally got my chance to find out when I came across a copy of 'Prelude' in a local library. There was no way that I wouldn't be reading it!

The premise is simple. Professor Xavier's mad son, Legion, has woken from a coma and promptly jumped back twenty years into the past. His plan is to make the world a happier place by killing its greatest villain before he turns to a path of darkness. Can the X Men of the present save the Magneto of the past? A lot more than one man's life rides on the outcome... And what if the wrong man were to die? That death could turn the present into a far different world entirely...

In many respects 'Prelude' is the book that I have been waiting years to read. I already knew what the Age of Apocalypse was all about but I never really knew what caused this event to take place (well, not in any great detail). Now I do and it's a story that may be a little too straightforward for some (like me) but also a story that resonates with a lot of power and emotion. This can lend a 'soap opera' air to proceedings (part of the reason why I stopped reading these books) but not as much as I thought there would be.

I did wonder how much of what happened was necessary to the plot though (Iceman's issues and Gambit's run in with Sabertooth for example) and this was where things got a little too much for me. 'Prelude' is as self-contained as it can be but there's no escaping the fact that it's part of a much larger narrative with lots of smaller sub-plots that clearly need to be rounded off before a new scenario can begin. This is ok for those readers who are familiar with the story already but if you're not (like me) then things can feel a little disjointed with what feels like several plots all working against each other. There are also loads of little references to events happening in other comics entirely (a 'Rogue' mini-series and 'Wolverine' for starters). This is a pet hate of mine anyway, it just feels like a money making gimmick, but it also has the unfortunate effect of making you feel like there's even more story that you're missing.

Once you get past this though, 'Prelude' still has a lot to offer and I'm glad I got to give it a go. I'm always up for a bit of super powered confrontation and there is plenty of that on offer here, particularly in the end stages where the X Men take on Legion in a suitably pyrokinetic fashion. The artwork is of a good standard anyway but was glorious in these sequences.

I also got a lot out of the focus on the relationship between Xavier and Erik; not only in how it gave the plot added impetus (and added an air of tragedy to the climax) but also in that I'd never seen this relationship before. It made for a real nice change to see things actually play out rather than be referred to yet another back issue.

'Prelude' suffers from problems that I think are endemic in Marvel comics as a whole but there is still a lot there to recommend the read. Definitely worth sticking with and it's got me all fired up to finally track down the big 'Age of Apocalypse' collections. I'm glad I read it.
Posted by John "Zanziber" Rogers at 6:00 AM
Email ThisBlogThis!Share to TwitterShare to FacebookShare to Pinterest
Labels: Reviews