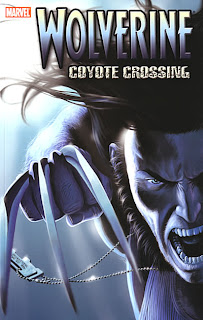 This isn’t a storyline that does much to advance the Wolverine mythos. It’s not about his past or his returning memories or his eternal fight with Sabretooth or anything like that. It’s a stand-alone storyline in which Wolvie is forced to face the fact that he’s stuck somewhere between being a man and an animal. The story itself is about Logan dealing with the leader of a Mexican gang and being tailed by the DEA agent who made her first appearance in the previous Wolverine story arc, “The Brotherhood”. I won’t go into the story, because a lot of it is meant to surprise you, but I will say that this story does a LOT to establish Logan’s humanity. Even after killing dozens of men in a rage, he is forced to deal with the fact that he’s not all animal… nor is he all man. This is a nicely complex character development story that I enjoyed immensely.

The art is also better, IMO, than Robertson and Palmer’s work on “The Brotherhood.” I know Wolvie’s short and stocky, but I don’t like art that makes him look like he just stumbled out of his cave. The art in “Coyote Crossing” captures his stature, but also conveys the elegance and ease of movement that he’s known for. I’m a bit ambivalent on the fact that his face looks a lot like Hugh Jackman’s; I prefer a bit more separation between the movie and comic ‘verses, but I really like that he’s drawn with long hair. That needs to be done more often.
Posted by John "Zanziber" Rogers at 6:00 AM
Email ThisBlogThis!Share to TwitterShare to FacebookShare to Pinterest
Labels: Reviews