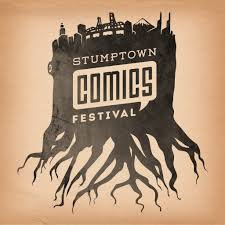 This was my first year going to Stumptown, and I look forward to attending next year as well. Unfortunately, I wasn't able to stay as long as I would have like due to sickness issues. Here are my thoughts around what I was able to take in:

CBLDF- Since my official introduction to them at this years Wizard World Portland, I found myself drawn to the wonderful offerings they had available. I limited myself to only picking-up volume 1 & 2 of the Grendel Omnibus. (Not sure if there will be additional published.) 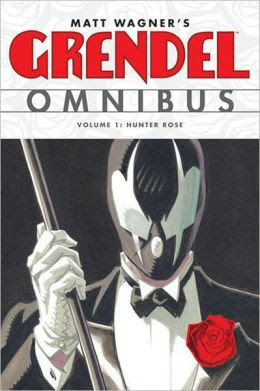 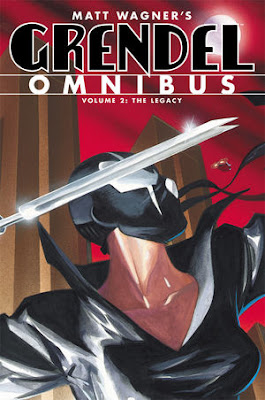 Bill Willingham- As those who regularly read this blog can attest to, Willingham is one of my favorite authors. Truth be told, he was the biggest reason for me to come to Stumptown. I must confess, I have not yet been drawn into the life of small press publishing. When I find artists and writers I like, I will be faithful to the end... I just need to open myself up to more. I would welcome opinions.

Back to Bill... When I arrived, he was doing an interview for one of the many podcasts that were also in attendance. He was also sitting in the aisle instead of behind his table, so this threw me off my game to approach him originally. Once I noticed he was sitting there just working on a piece of art, I came up and asked for his time.

Same as the first time I met him at ECCC last year, he was easily approachable and funny to talk to. Unfortunately, my mind blanked on a few of the questions I had prepared to ask him. (I chalk this up to my feeling sick shortly after my encounter.) Next time, I'm writing my questions down.

Becky Cloonan- While I am a recent admirer of Cloonan's work (The Guild: Zaboo and Batman #12 from the New 52), I took my meager offerings for her to sign. When I first arrived at her table, she was working on a sketch and there was someone at her table going over what she had available for sale. The one item she had that really caught my interest was Dracula (Bram Stoker) where she had added artwork to. After flipping through the book, I thought that perhaps this would make reading Dracula a bit more palatable. Between this book and my comics to sign, I left her table content.

Jason Martin- While walking through the con, my eye was drawn to an image that made my inner child giddy... 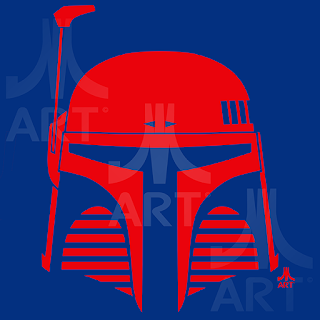 "Cobra Fett" drew me in to looking at Martin's work, but his print offerings kept me there. He had prints featuring the Walking Dead and Game of Thrones. I wish I had purchased more of his prints, but I did get 6. I also picked-up a print of "Cobra Fett" and the others are going to be gifts, so I'm not going to post them. I'm going to be keeping my eyes on his work. Here's a link to his blog.

Ron Randall- Though I've never before been introduced to Randall's work, when I stopped by his table I found him very inviting. I took a look at his Trekker offerings, and decided to take an interest. I had never heard of this title before, but when I did a little research after getting home, I found the history very inviting. I'm going to read the issue from Image I bought from him and post a review. Before I even read it, I recommend people to give him your support. From the little time I actually spent with him, I could sense that he is very passionate for this title. Here's a link to his website.

Bridge City Comics- I must have passed their table several times before I stopped to look at their trade and graphic novel offerings... which were all highly discounted. One in particular caught my eye: "X-Men: Fall of the Mutants Omnibus". The 2 reasons this caught my attention are A) I just added the single trades to my wishlist on Amazon earlier in the week -AND- B) they were selling it for $40! That's 60% off the cover price. It's a huge book, and carting it around the con would have proved difficult with the limited space I had in the only bag I brought. After some time, I came back and bought the omnibus. It felt good, and I regret nothing.

After this purchase, I decided to go back to my van and drop-off what I had so that I could come back for more. That's when the sickness took me and I decided to leave rather than share what I was feeling.

Now.... on to FCBD!
Posted by John "Zanziber" Rogers at 10:03 AM
Email ThisBlogThis!Share to TwitterShare to FacebookShare to Pinterest
Labels: Opinion, Stumptown Comics Fest