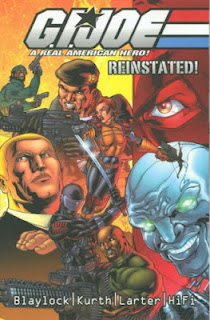 Marvel Comics began producing a G.I. Joe comic book back in 1982, the same year Hasbro rolled out the new 3 ¾” line of Joe action figures. The series was a big hit and would be one of Marvel’s top sellers for many years and spawn several companion titles such as G.I. Joe Special Missions and G.I. Joe European Missions. But as the popularity of the toy line waned, so did the popularity of the comic and the title was finally canceled in 1994 after 155 issues. G.I. Joe lay dormant for seven years until resurrected by Devil’s Due in 2001. “G.I. Joe Reinstated” re-prints those first four issues where we see the Joe team brought out of the mothballs to once again face off against arch-nemesis, Cobra. But this was not the G.I. Joe of twenty years ago which was squarely aimed at the young boys who played with the action figures. This was a grittier, edgier Joe, fully immersed in our modern world of terrorism and 9/11.

Reinstated begins deep in the Florida Everglades at the base of Dreadnok leader Zartan. Zartan hosts a meeting of Cobra dignitaries including the Cobra Commander, the Baroness, Major Bludd, Destro, Dr. Mindbender, Tomax, and Xamot. These diverse and ego-maniacal personalities instantly begin squabbling over power as the Cobra Commander presents Cobra’s newest weapon…nanite technology which he claims will infect and destroy virtually anything it’s introduced into, whether it’s mechanical or organic. Destro manages to usurp power and imprison the Cobra Commander. But military has been keeping an eye on Zartan in the form of Snake Eyes’ apprentice Kamakura, who relays his information to Joe command. After seven years the Joe team is reassembled with Duke, Flint, Scarlett, Snake Eyes, Roadblock, Shipwreck, Gung Ho, Mainframe, Spirit, and more…We catch up with the Joe team and learn that Snake Eyes and Scarlett were to be married but Snake left three weeks before the wedding. We also learn rather humorously that Bazooka is no longer quite fit for active duty.

The Joe team begins their assault on Zartan’s base but it is all a ruse to draw the Joe team in. Scarlett and Snake Eyes are captured and several members of the Joe team, including many new recruits are infected with the nanites. Furthermore, Cobra has begun infecting infrastructure in the U.S., hitting government installations, communications networks, and other targets, resulting in widespread damage and chaos. Cobra’s plan is then to play the good guy and save the day so the government will be in their debt. The Joe team must now find a way to battle this new technology and save the men and the nation from Cobra’s latest threat.

Reinstated was an extraordinary story and a great way to bring back the Joe team. Far from the more implausible Marvel stories, Reinstated handled the seven year absence logically with the various Cobra members quibbling over power. Meanwhile on the Joe side we are given some meat to the past seven years that the Joe team had been disbanded. While it would have been great to see a bit more of what’s happened to the team in that time, it was at least nice to see the subject handled intelligently. And in a plot right out of today’s headlines we hear that people are protesting in Washington over the Joe Teams attack on the Cobra base. Kudos to Josh Blaylock for playing up the whole sympathizing with the terrorists angle as many people today have done with Al-Quida. Steve Kurth and John Larter provide the striking artwork putting the finishing touches on this great trade collection. Devil’s Due had done a great job of balancing staying true to the characters Marvel and Hasbro introduced and updating them for 21st century readers. I like having the stories aimed at a more mature audience than the “G” rated Marvel material. Clearly, G.I. Joe is in good hands at Devil’s Due.
Posted by John "Zanziber" Rogers at 6:00 AM
Email ThisBlogThis!Share to TwitterShare to FacebookShare to Pinterest
Labels: Reviews