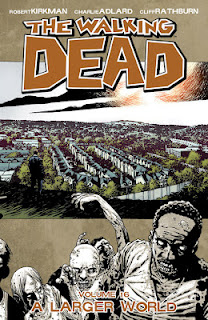 The 'Walking Dead' series has had far more ups than downs so all I had to do was hope that volume 16 took things back on an upward path rather than the other direction. It's a slow path upwards but 'A Larger World' does start to move things in the right direction again.

Supplies are growing dangerously low in the settlement and the surrounding area has been picked clean of anything useful. Trips further afield are in order and one such trip reveals that Rick's community isn't the only one trying to survive. New encounters invariably mean new problems to solve though and Rick and his friends must face up to some tough decisions if their community is going to make it through the winter...

'A Larger World' has similar problems to the previous volume in terms of just how safe the characters all are. There's a big walled settlement for shelter and even the weakest character has killed enough zombies for that not to be an issue either. A little bit of the tension is missing then but Kirkman sidesteps this rather neatly by throwing the wider setting into sharper focus. There's a whole new world out there and Kirkman shows us the potential here for new tales yet to come.

If there's a problem here it's very much that all these tales are 'yet to come'. 'A Larger World' is all about setting things up for future volumes so be prepared for not a lot to happen at times. Balancing this out though is the air of menace that Kirkman builds up over the course of the book; 'A Larger World' isn't just filler, things are being laid in place that promise something explosive in the very near future. This is what I'm after and I don't mind waiting a little bit longer if I know it's coming.

There are also more developments, on the personal front, for our band of survivors and it's all credit to Kirkman that he keeps things becoming too much like a soap opera. These are people learning to feel again, after some traumatic events, and I think Kirkman captures that perfectly.

Like I said then, it's a slow road but 'A Larger World' sets the plot back on an upward trajectory. I’m all excited again about seeing where the series takes us next.
Posted by John "Zanziber" Rogers at 6:00 AM
Email ThisBlogThis!Share to TwitterShare to FacebookShare to Pinterest
Labels: Reviews