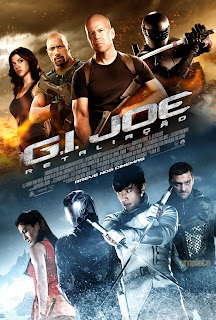 After they pulled this movie from it's original June 2012 release date to make it 3D, I really had my doubts. I felt that if it couldn't stand alone with its story and FX without the addition of 3D, it would be another letdown. After the awesomeness that was the Avengers movie, I understand why the execs for this movie decided to push it to a 2013 release.

After all my initial misgivings about this movie, I decided to go and watch it anyways.

Though much of the original cast didn't return for this sequel, and Channing Tatum as Duke didn't last very long, I think that may have been for the better. There was not much mention to what actually happened to people like Scarlett, Ripcord, General Hawk, Heavy Duty, Baroness and Mainframe.

I appreciated that it looked like the writers actually had read some of the original comic books. Fans of the original Marvel series should appreciate the Arashikage Mind-Set being used and a great homage to the "Silent Issue". There is a great deal of ninja action packed into this movie, but thankfully it doesn't go overboard and introduce the Ninja Force. (Read the later issues of the original run of Marvel's G.I. Joe: A Real American Hero series to understand that reference.)

I was hesitant about seeing Dwayne "The Rock" Johnson in this movie since his movies have been fairly hit-or-miss, IMHO. I think Johnson's performance was good and held the film together. I know that he has recently returned to wrestling in an effort to better promote his movies.

Ray Stevenson's portrayal of the Cobra saboteur Firefly was excellent, although I think that the motorcycle that split into separate rocket pieces was a little out there. Since I just finished reading the stories in the TPB's involving Firefly as a ninja, I was glad to see that the writers didn't take it that far for the character.

Another aspect of the original comics was to promote the toys. I'm glad that this movie didn't have to sink so low as there is only a single reference to a named vehicle: the HISS tank. The new HISS tanks are a better concept that the original ones from the comics or the cartoons. I didn't feel that I had to suspend my understanding of reality to belief what I was seeing.

Of course, the ending was very open for a sequel, so I expect a final installment of the G.I. Joe series will come to us in 3-5 years.

One other side note... There were promo posters in the lobby of the Regal theater I went to. Here's what they look like on the front:

On the back of this poster, they are already promoting the release of the Blu-Ray/DVD/Digital combo that can be preordered at Walmart. I just had to laugh when I saw that.

Posted by John "Zanziber" Rogers at 7:41 AM
Email ThisBlogThis!Share to TwitterShare to FacebookShare to Pinterest
Labels: Movies, Reviews