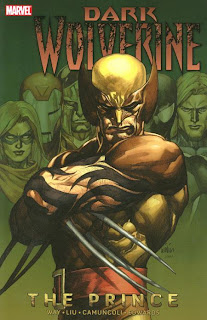 The story of Daken Akihiro, better known as Dark Wolverine, is an intriguing one, filled with half-truths, misconceptions and allusions that leaves us with only more questions. Is Daken really as evil as his father, Logan, believes? Is he a bad guy? What are his motives? While these questions aren’t exactly answered in “Dark Wolverine: The Prince,” which is a collection of issues 75-77 in the series and issues 73 and 74 in “Wolverine,” the series is an absolute blast to read through and prove that Akihiro, just like his father, is the type of character worth digging your claws into.

Co-written by Marvel vet-Daniel Way and novelist Marjorie Liu, the trade has a sneaky feel to it, as you never quite know what to expect. With sprinkles of Machiavellian quotations in between the dialogue, which mainly consists of the inner thoughts of Daken, as he hatches his master plan, this trade has the feel of a novella, rather than a comic book.

That’s anything but a problem though, as this character is as deep as a tortured soul in a work by Poe and as brash as a Hemingway hero. Simply put, after reading these issues that comprise this trade, you’ll be running to find the next one. As cool as James Bond and as tough as his father, Daken is a walking oxymoron- a philosopher and student of life that refuses to use his intelligence when in combat, a manipulator with a heart and a lover without a soul.

If anyone ever wondered if “House of M” was worth it in long run, the birth of this character has to be a huge selling point.

With a fresh spin and tons of potential, “Dark Wolverine” is a series worth keeping your eyes on and “The Prince” is living proof of that.

Away from the writing however, the art, done marvelously by Guiseppe Camuncoli and Tommy Lee Edwards is both a tribute to the old Wolverine comics of yesteryear [one panel in particular shows Daken, in his father's costume with an olive from a martini in his mouth- the resemblance here to papa claws is uncanny] while being chic and savvy enough [using tons of color and huge panels for action scenes] to attract new readers. This, coupled with covers by Adam Kubert and you have a great looking book that compliments the solid writing beautifully.

Because of the level of the writing and polish in the visuals, regardless of one’s affinity for Marvel’s most popular character or not, any fan of the medium owes it to themselves to check out this trade. Full of original thought, sexiness and pizazz, it’s a rare treat for anyone sick of the same old characters in the industry today.
Posted by John "Zanziber" Rogers at 6:00 AM
Email ThisBlogThis!Share to TwitterShare to FacebookShare to Pinterest
Labels: Reviews