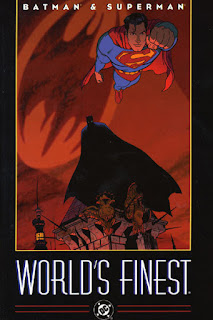 Karl Kesel's Batman & Superman: World's Finest is not the best of the Superman/Batman team-up miniseries (I reserve that honor for Dave Gibbons and Steve Rude's World's Finest). It does, however, does have an interesting premise in aligning the disparate events of the Superman and Batman worlds into one cohesive story, especially the death of Jason Todd with Superman executing the Phantom Zone criminals, and "Reign of the Superman" with "Knightfall."

Sterling Gates's new World's Finest takes a similar approach, bringing together the current "Batman Reborn" and "New Krypton" storylines. I wouldn't venture there's anything earth-shattering here, but the book is big on fun and Gates gets all the characters' voices right; for those of us who enjoy understand how the DC Universe coincides, this is a satisfactory excursion.
[Contains spoilers]

Notably, Gates ducks some of the easier team-ups at the start of this book, choosing to pair Red Robin with the Kryptonian Nightwing rather than with Superboy, and absenting Mon-El altogether in favor of the Guardian with Robin Damian Wayne. I might've liked to see Batman Dick Grayson's response to his new Nightwing namesake, but I appreciates that Gates follows up on a small but poignant scene from Kurt Busiek's Superman run, remembering the impact Tim Drake had on Superman's adopted son Chris.

While the story feels maybe mildly incomplete without Mon-El, the Guardian is the better fit of the "Metropolis characters" to pair with Robin because of his previous friendship with the Newsboy Legion. I liked that Gates didn't feel compelled to have the Guardian or Robin learn anything, but rather part mistrusting one another, not unlike Superman and Batman have in the past.

Further, after Peter Tomasi's general mis-characterization of Damian Wayne in Blackest Night: Batman, I had some concern whether Gates would get Damian's ten-year-old assassin brattishness quite right; he does. As a matter of fact, I specifically read World's Finest as the "next appearance" of the Stephanie Brown Batgirl after Batgirl Rising, a book in which Damian is a key player; no doubt Gates can write Batgirl, given that he ably handles Supergirl month in and month out, but whether Bryan Miller's distinct Batgirl/Robin interplay seems much harder to duplicate. Gates delivers, however, and even adds his own touch in a funny end panel where Supergirl lectures Damian for calling Batgirl names. As I mentioned in my Batgirl review, there's a way in which the "Batman Reborn" characters are more of a family than they have been previously, and I like this familial aspect a lot.

There is not, at the end of World's Finest, any deep meditation on the nature of the Superman or Batman families or their differences. If anything, whereas everyone claims to miss Bruce Wayne, Superman notes he and Dick Grayson's first "world's finest" team-up with the implication that Dick is perhaps easier to work with than Bruce, and the reader knows it's true -- one wonders if that's something Bruce will have to deal with, not being the "favorite" Batman, when he returns.

As the Super-titles are Gates's bailiwick, World's Finest ends with a connection to "New Krypton," and really not at all with "Batman Reborn" -- which is fine. I'm not sure either series will actually pick up on World's Finest, but it's enough that World's Finest ties in to something both in terms of the characters and the plot; the best team-ups, in my opinion, forward the series of all the characters involved, and World's Finest does that sufficiently as far as I'm concerned.

Rounding out this collection are a DC Comics Presents Superman/Robin Dick Grayson team-up from 1981, and Action Comics #865 by Geoff Johns, from 2008. The latter is a prime example of what Johns does for comics; while other writers might have scratched their heads (or started from scratch), Johns offers a fairly simple story that returns Toyman Winslow Schott to his roots, preserving and at the same time overcoming the violent Dan Jurgens story that saw Toyman kill Cat Grant's son Adam.

This is one of two previously uncollected issues from Geoff Johns's recent Action Comics run -- included here because of the Toyman's role in this story -- and I appreciate that DC gives it the light of day; only, I wish they hadn't left off the last page. That page features Cat Grant just before Superman: Brainiac, and while it wasn't relevant to World's Finest per se, I would have liked DC keeping it for the issue's overall historical value.
Posted by John "Zanziber" Rogers at 6:00 AM
Email ThisBlogThis!Share to TwitterShare to FacebookShare to Pinterest
Labels: Reviews