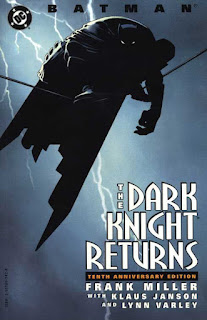 Frank Miller changed the rules and wrote the Batman story no one else would write.

Sure, people had written stories before about an aging Batman. Usually, they were cute tales about the retired and happily married hero beaming proudly as the former Robin takes his place in the cape, and his young, blond son became the new sidekick.

But Miller did something a little different. With The Dark Knight Returns, first issued in collected form in 1986, he redefined the genre of comics forever. As Alan Moore, himself an innovator in the genre, wrote in his introduction, Miller "has taken a character whose every trivial and incidental detail is graven in stone on the hearts and minds of the comic fans that make up his audience and managed to dramatically redefine that character without contradicting one jot of the character's mythology. ... Everything is exactly the same, except for the fact that it's all totally different."

In the first of four chapters comprising the series, Miller introduces us to an aging Bruce Wayne who's been retired as Batman for 10 years and is obsessed with his own death. Commissioner Gordon is still around, but he's being forced to retire from the police force on his 70th birthday, one month away. And Gotham City is going to Hell, the victim of a heatwave and a massive upswing in violent crime.

Then we learn of the release of reformed criminal Harvey Dent, the former district attorney who became Two-Face when scarred with acid. A leading psychiatrist vouches for Dent's new found mental stability, and a top plastic surgeon has finally restored Dent's face to normal. But then Dent disappears and a new crime wave begins.

And suddenly, witnesses are reporting a large, bat-like creature attacking crime all over the city. For a while we get glimpses -- a boot, a glove, a crippled criminal -- interspersed with news reports and man-on-the-street interviews with people debating the existing of Batman.

Our first glimpse of the hero, leaping after a getaway car, sets a standard for dramatic artwork which helped to remold the look of comics in the years since its first release. Although Miller was assisted in the art by inker Klaus Janson and colorist Lynn Varley, the overall look of the book is his own -- and he did a tremendous job with it. There are better artists out there, but Miller's bold, sometimes repetitive presentation borrows some visual ideas from film-making and, coupled with the text, provides a new style in story art.

It is also during this first chapter that Miller remakes the moment that made Batman. Sure, the basic story is the same -- heading home after seeing The Mark of Zorro, the young Bruce Wayne watches his parents brutally gunned down by an alleyway hoodlum -- but the details, down to the pearls falling from his mother's broken necklace, have been copied and recopied by countless Batman artists since.

Chapter two gives us a different sort of criminal -- no less colorful than the Jokers, Penguins and Two-Faces, but far more real to many contemporary city dwellers. The Mutants, as the gang has been called, is made up of young anarchists with a thirst for violence and no concept of innocent bystanders. They kill for fun, for kicks ... and they have the weaponry to make it hurt. In a way, these kids are more evil than all the plots and machinations of Batman's usual costumed foes.

Again with the splashy full-page entrance ... Batman's attack on the insane Mutant leader is visually awe-inspiring. The battle which follows is a heart-stopper. And the rematch ... oof.

This chapter also introduces the new Robin, an acrobatic girl sold on legends of the old Batman. Her entrance into the action is a surprise, more to the Batman than to the readers, but she makes a noteworthy addition to the ranks of Robins who've worn the gaudy costume.

Chapter three -- the Mutant threat is over, but the former gang members have splintered into violent pockets. Some continue their reign of terror on a smaller scale, while others become the Sons of the Batman, a vigilante group for whom there is a very thin line between criminals and victims.

Growing turmoil in Gotham mirrors a global crisis in Central America. One man is called upon to handle both -- and let me give you a hint, he's faster than a speeding bullet.

In the past, Batman and Superman were often paired as good friends. In the new DC universe, writers have followed Miller's lead -- the two heroes with such drastically different approaches are respectful allies, not pals. There are walls between them that even Superman can not leap.

In this portion of the story, the conflict between Superman and the Batman begins to grow. Superman is acting under federal orders to stop the vigilante, but his efforts are delayed when international events go nuclear. To make matters worse, the Joker -- long held quiescent in Arkham Home for the Emotionally Troubled -- escapes, leaving hundreds dead in his wake.

And the Batman wonders how many deaths he's responsible for, simply because he never put a final stop to the Joker's ruthlessness.

The third chapter is the real climax of the series, with the final conflict between the Batman and the Joker digging more deeply into the heart and soul of these characters than any writer has ever done, before or since. A priceless moment: Batman, wounded and in pursuit of his foe, pauses to admonish a small boy for his language. Priceless!

The police, now led by a young, anti-Batman commissioner, are an additional stumbling block in Batman's path.

Throughout The Dark Knight Returns, Miller takes a step away from the standards in comic-book crime. There aren't so many of the grandiose schemes, full of costumed bad guys, outlandish props and corny mayhem, which marked so much of Batman's prior history. Instead, we have people who've turned to crime as a means to end -- money, power, cheap thrills -- and the casualness with which some of them kill is like a bucket of cold water. This isn't four-color fantasy, this is real life, lifted from the newspaper and replayed on the pages of a comic book.

And this Batman, too, is different. He's not afraid of violence, he uses it as a weapon against his foes. Unlike the standard comic-book Batman, he will occasionally employ firearms in his fight, although he still draws the line at killing. And wait 'til you see Miller's rendition of the Batmobile.

The public reaction to the Batman's return is also a cold dose of reality. A vigilante in the real world wouldn't receive the black-and-white response usually seen in comic books, from the 100 percent adulation given DC's Superman to the distrust and hatred pointed toward's Marvel's various X-groups. The debate over the rights and wrongs of the Batman's methods, played out in TV broadcasts scattered throughout the book, shows a broad range of public mindsets, from outrage to acclaim -- and support from some folks whose praise Batman would probably loathe to be associated with. And there are people inspired by the Batman -- and not all of the results are positive. And when a new gang emerges, feeding on criminals....

Another hit of reality -- doing what Batman does, especially at his age, hurts. He's not a young man anymore, and muscles, lungs and even his powerful heart can only take so much. Miller doesn't soft-pedal that aspect of heroing -- his characters don't take a near-mortal blow in one panel and act perfectly healthy on the next page.

Throughout the book, the broadcast media takes a beating. I can't say it's not well-deserved.

Miller inserted some clever cameos into the storyline, including the pre-Crisis Lana Lang as managing editor of the Daily Planet in Superman's Metropolis, broadcasting mogul James Olsen and a very Reagan-like U.S. president, painted with a broad brush of satire. There's an almost-David Letterman and a nearly-Dr. Ruth. Former Catwoman Selina Kyle now runs her own escort service. (Before recent revisionism, Kyle was a prostitute before she was a thief.) We learn where Diana (Wonder Woman) and Hal (Green Lantern) have gone. Oliver Queen, the former Green Arrow, makes the best entrance of all, leaving more questions than answers in his wake but adding a necessary edge to the climactic conclusion.

It's touches like this which push Miller's work even further beyond the pale.

The final chapter begins with a near-Apocalyptic Gotham. Superman, for all his vaunted power, apparently isn't as clear on the physics of nuclear explosions as we'd like. He deflects the bomb, but the otherwise harmless explosion blankets the city in artificial night and artificial winter. Panicked residents riot over food and guns, and a powerless jet falls from the sky. The scenes as Batman gallops through the city on horseback, gathering followers to control the outbreak of mass hysteria, would make an incredible movie sequence.

But finally, Superman returns, as we know he must, carrying a federal order to stop the Batman. What follows is a clash of titans worthy of the legends both characters have generated over the years. To say any more would ruin the ending ... so, if you haven't read this one yet, do so. You won't be sorry.
Posted by John "Zanziber" Rogers at 6:00 AM
Email ThisBlogThis!Share to TwitterShare to FacebookShare to Pinterest
Labels: Reviews