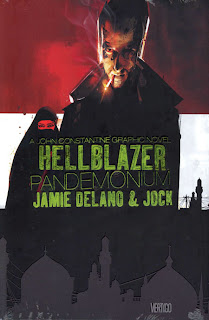 In the 25 years since his first appearance, we've seen John Constantine in many places, from Swamp Thing to a reality television show in Hell, a God-awful film adaptation, and everything in between. In Hellblazer: Pandemonium, Vertigo's new original graphic novel from the first Hellblazer writer Jamie Delano and artist extraordinaire Jock, Constantine goes someplace new: Iraq.

That's right, the man who is devoutly against standing for something blindly with a uniform on is coerced by some government spooks to be their interrogation expert on a POW they've acquired that seems to be driving previous interrogators mad by some means of magic. After setting up an elaborate scheme to trap Constantine in their politics, our hero and a double agent named Aseera are en route to the center of the War on Terror.

Originally, I was a bit apprehensive at Delano using John Constantine as a soapbox for his opinions on the Middle East situation, but was relieved to find that Pandemonium was as much an exploration of the merits of war and torture as it was another occult adventure for everyone's favorite chain-smoking occult investigating cynic.

That's not to say I don't appreciate the merging of established characters and politics; it's been done before to great effect. Delano is cleverly able to tie in the war in Iraq with Middle Eastern mysticism, creating a world in which Constantine fits into easily, despite my initial trepidation. Delano's characterization of Constantine is spot-on with where he left him when he exited Hellblazer in 1991: potty-mouthed with self-indulgent wit, but always with that sliver of a soft spot. Though the relationship Constantine develops with Aseera is fairly predictable and winds up being one of the more drab elements of the story (though one of the most significant), the supernatural concepts, musings on the War on Terror, and trademark Constantine moments more than make up for it.

Delano is quite heavy on Constantine's inner monologue narration, which I normally find a distraction and/or cheap storytelling device. However, nearly every page is filled with intelligent words and nothing is wasted. There's no restating of what is happening in the panels, just emphasis. One scene in particular, in which Constantine is in the underworld of Nergal playing a poker game of sorts with an assortment of demons, is beautifully written. It's only a few pages long and told almost entirely through Constantine's monologue, but I can honestly say I can't recall any card game played out in a comic book that was even remotely interesting. Delano enhances the entire scene through the intense and meaningful words of his main character. Of course, the fact that Constantine's chips are human souls adds a little something as well.

Of course, Delano's script could be the most poetic Hellblazer piece ever written and it wouldn't mean squat if it wasn't rendered well. If you're a fan of Jock's, be it from The Losers, Detective Comics, Judge Dredd or his cover work on books like Scalped, you know what to expect. His work is frantic but with careful planning; his lines are incredibly sketchy and often thick with heavy inks and plenty of shadow. His coloring is very washed out and adds an appropriately grim aesthetic to the entire book.

It might seem like a wild comparison, but in many way's Jock's work is akin to impressionism. So many of his images, if analyzed up close, look like nothing more than a chaotic mess of scratches and shadow. When you look at the page as a whole, all of these lines come together in a way that tell the story beautifully and you realize the meticulous organization that goes into his work.

I'm not sure that Pandemonium will go down as one of the prototypical Hellblazer tales, nor will it be the definitive mainstream comic’s political commentary of the War on Terror, but it damn sure is an enjoyable, visually poetic rendition of Vertigo's most enduring character.
Posted by John "Zanziber" Rogers at 6:00 AM
Email ThisBlogThis!Share to TwitterShare to FacebookShare to Pinterest
Labels: Reviews