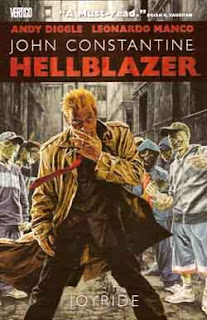 Modern trickster mystic John Constantine has been many things in the decades since his introduction in the Swamp Thing story arc American Gothic. But what he’s never been since that debut is exactly what new writer Andy Diggle returns him to in this trade. When he first introduced himself to the giant vegetable Bog God, Constantine was a cool, sharp-dressing, smug, in-control and very dangerous man-of-mystery we weren’t supposed to like. He oozed menace and untold secrets and was always in charge of the situation.

After twenty years and more of going to Hell and Back, that menacing stranger returns, but with enough accumulated shared history now that the reader can still empathize with this unlikely hero whom no sane man would actually want to have a pint with. Moreover, despite being a Scouser (someone born and bred in Liverpool) by birth, Constantine is a Londoner by disposition, and Diggle writes him with that so distinct voice and attitude.

Back on top and dressed to impress, the hard man does a favor for an old acquaintance in the first tale of this chilling collection. Pearly Grey was an old-school East End gangster, but he’s in Wormwood Scrubs now, at Her Majesty’s pleasure. His daughter’s dead and she was murdered. He knows how but not who because she told him when her ghost appeared in his cell. Pearly knew everybody once, and if this isn’t a normal job, it needs the attention of a specialist…

Solving the problem of the unquiet dead is only the first step however. The grateful Grey repays his debt by giving Constantine a chance to clean up old business at Ravenscar, once the scene of the Magician’s greatest failure, but now part of the gangster’s extensive property portfolio. It couldn’t have gone better if Constantine had planned it…

The final tale introduces a new nemesis for the chain-smoking wizard in a grimy, nasty tale of possession in the blighted urban hell of South London. With triggers lifted from any daily paper, this is a tale of murderous wasted youth, privilege and social disorder, murder and witchcraft, prompted by greed and the utter contempt of the elite for the rest of society. Political corruption stalks hand-in-hand with blood-hungry monstrosity in this very British horror story and at its blood-soaked centr is a bloke in a raincoat with a smile that can make a statue sweat…

This is a welcome advancement and return to terrifying form for one of American fantasy’s most striking characters. Thoroughly British once more (our comics never got the handle on heroism: All the best and most memorable characters were villains like The Spider, The Dwarf, Grimly Feendish and Charlie Peace or maniacs like Judge Dredd) this is a unique character at his compelling best, and another superb horror tome to add to your “spooky” shelf.
Posted by John "Zanziber" Rogers at 6:00 AM
Email ThisBlogThis!Share to TwitterShare to FacebookShare to Pinterest
Labels: Reviews