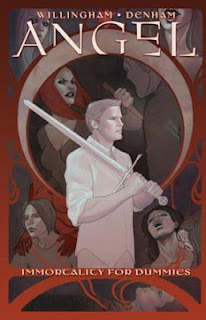 In Immortality for Dummies we get to see Connor not be a pussy for once. He is out on a mission when he runs into some demons from the dimension he came from. Some demon chicks show up and help him out, call him the chosen one and then tell him they are offering him an army. This can’t possibly go wrong right. I mean its Connor.

Anyway like I said everything is kinda back to status quo. The hangout is the Hyperion and everyone is back, with some extras with the exception of Wesley. Which is better than having him back for no reason at all like before. It looks like there will be someone who will fill the whole that Wes left in the group though.

The meat of the story lies in trying to get Angel back from this corporation that is using Angel to turn celebs into vampires, and then restore their souls. It wasn’t with evil intent, but I mean how could this not go wrong.

The art here is pretty amazing. Every character looks just right, and that coupled with the dialogue means that it was very easy to hear the characters in my head as I was reading. Something I can’t say for any other Buffy/Angel comic.

I don’t want to spoil anymore of the story, because it is clearly setting up for something big down the line for Mr. Willingham. The art is great, the story feels like an Angel story, and everything just seems to work. Go ahead and give this a try even if you didn’t read/enjoy the previous arc. It will be worth it.
Posted by John "Zanziber" Rogers at 6:00 AM
Email ThisBlogThis!Share to TwitterShare to FacebookShare to Pinterest
Labels: Reviews