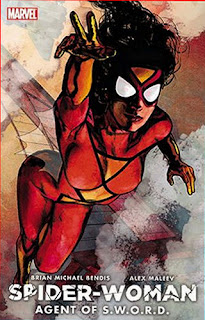 It’s a got a great, moody noir feel.  This can often be heavy-handed and forced, but not here. The gritty mood and Jessica Drew’s first-person perspective is quite appropriate for a former secret agent (two times over) and private detective who is at an all-time low and seeking some sort of redemption after the Skrulls have tainted her name and reputation by replacing her with an imposter as their queen during Bendis’ INVASION storyline. The noir atmosphere is especially right for a story in which Drew is hired by a shady counterterrorism organization to hunt down the shape-shifting Skrulls, first in a nasty part of the world.

Drew first was an agent of Hydra before working for SHIELD. Now an Avenger, Drew is recruited by Abigail Brand to be agent for S.W.O.R.D., the Sentient World Observation and Response Department.

“It’s an international counterterrorism and intelligence agency that deals with extraterrestrial threats to world security,” Brand tells Drew in their first clandestine meeting on an empty bus.

Give Drew’s history with espionage (on the sides of both good and evil), one would think she’d be full of confidence. But her inner monologue reveals a skilled woman who not only second-guesses herself and her situations, she’s just plain neurotic. She’s equal parts confident and unsure of her next move and obviously, who to trust. This makes Drew come to life. She’s not just a spurned superhero on a mission. This is important since AGENT OF S.W.O.R.D. truly is a Jessica Drew story, not a Spider-Woman one (regardless of what the title is).

Drew doesn’t have the stereotypical everything-is-under-control demeanor of a James Bond- or Jason Bourne-style superspy. She’s more of a shoot-from-the-hip-and-I’ll-figure-it-out-later person. At the same time, she’s reluctant to use lethal force and even more hesitant to release her pheromone-based gift of making others either fall in love with her (in turn, getting them to do what she wants) or making them deathly afraid of her. It makes for a fun, unpredictable mix.

Adding more intrigue to Drew’s character is her heritage, considering she was raised in the Hydra terrorist organization and has a tumultuous relationship (if you can call it that!) with Madame Hydra aka Lady Viper, whom Drew calls “queen of the crazy women.”

I’ll let Jessica explain: “Factoid. In her most crazy moments, she actually thinks she’s my mother. She’s not. My mother’s dead. I know because I watched my Hydra terrorist father kill her right in front of me.”

Visually, what’s intriguing Maleev used Joylnn Carpenter as his real-life model for Jessica Drew. Maleev makes Drew quite realistic, especially with her expressive eyes - an extremely nuanced and difficult to do with any character. Since I was curious as to what Carpenter actually looks like, I found her on the Internet Movie Database (aka imdb.com). In short, Carpenter is a stunning looking woman with incredibly alluring and sexy eyes. Maleev’s Drew is attractive, but not in any kind of supermodel, or even underwear model, way. Well played, sir!

Combine all this with Bendis’ obvious lifelong jones for Spider-Woman and, well, this tale has legs.
Posted by John "Zanziber" Rogers at 6:00 AM
Email ThisBlogThis!Share to TwitterShare to FacebookShare to Pinterest
Labels: Reviews