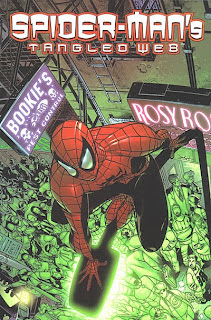 I was a Teenage Frog-Man - Leap Frog is out of prison and turning over a new leaf, but his son can't take the embarrassment of having a loser former super-villain for a father.  The kids at high school are constantly making fun of him until he takes matters into his own hands - and becomes the new Frog-Man!

Double Shots - A group villains get together at a super-villain bar and tell stories of their battles with Spidey.  Kraven (the son) and the Vulture tell their stories until Norman Osborn (the Green Goblin) trumps then all with his story.

The Last Shoot - We get the story of Crusher Hogan before the fateful night he challenged all comers and wound up against a masked teenager who would become Spider-Man.

Heartbreaker - Tombstone has a bum ticker and gets sent to prison where he's in danger of having a heart attack at any moment.  The Kangaroo takes a special dislike to him and he may never make it out of prison alive.

The art can be a bit rough, but works with the gritty crime angle to the stories

This third volume of Tangled Web explores the darker side of the street by focusing on Spidey's villains.  It's a refreshing set of gritty stories with surprising appeal and much better than the second (even the first) volume.
Posted by John "Zanziber" Rogers at 6:00 AM
Email ThisBlogThis!Share to TwitterShare to FacebookShare to Pinterest
Labels: Reviews