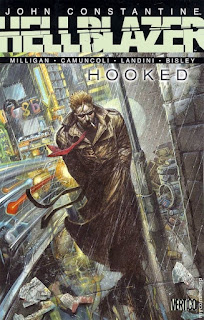 Urban occultist John Constantine has straddled the fine line between right and wrong since his debut more than 25 years ago in the pages of Alan Moore’s acclaimed run on Swamp Thing. A conman and a trickster, he has proved willing to make any sacrifice to achieve his objectives, whether that be friends, family or even his own mortal soul. The jaded, cynical Constantine has allowed himself to get close to someone, but the old weaknesses are hard to abandon, and he resorts to using a love potion to win her commitment, something he would never have needed to resort to in the past. But Constantine is getting old, and for the first time he appears frightened of being alone, leading him to take dangerous risks and sinking to new moral lows.

As anyone who has followed the character will know, things never end well for the streetwise shaman whenever a woman gets involved, and this story is no exception…

Writer Peter Milligan obviously has a long game plan for his run on Hellblazer, and there is much set up here which will only be resolved in subsequent volumes, but that shouldn’t discourage new readers from exploring what dark and deadly corners of reality he is taking John these days.
Posted by John "Zanziber" Rogers at 6:00 AM
Email ThisBlogThis!Share to TwitterShare to FacebookShare to Pinterest
Labels: Reviews