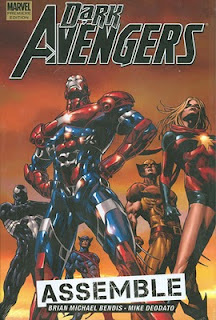 Who are the Dark Avengers? Well, they’re basically the normal Avengers, but DARK.

The Dark Avengers are a team of super villains, “assembled” by head of H.A.M.M.E.R. (presently S.H.I.E.L.D.), former-Green Goblin and media/political darling Norman Osborn. Their role in the Marvel Universe is to serve as the public face of Osborn’s regime. On the outside, they don the costumes and titles of recognizable and time-honored heroes, meaning Venom is now “Spider-Man,” and Wolverine’s spiteful, vengeful, bisexual, over-exposed and Punisher-killing son, Daken, is now masquerading as “Wolverine” himself.

(Sorry, I still haven’t quite forgiven Daken for the whole “chopping the Punisher to pieces” thing. For the record, though, that was an awesome fight, well worth reading for any fans of John Romita Jr’s art, or brutally violent scenes of superhero violence.)

The whole point of the Dark Avengers is that, their actions -- however beneficial to the people of Earth -- ultimately adhere to the will and nefarious machinations of Norman Osborn.

Writer Brian Michael Bendis manages to cover a lot of ground in this first story arc, all while managing to keep continuity neophytes up to date (including me). In order, we get the obligatory “how they all came together” sequence, immediately followed by the team’s first field deployment. Being as this is a book about villains masquerading as heroes, it’s only appropriate that the Dark Avenger’s first mission is to rescue Dr. Doom, a member of Norman Osborn’s recently installed string-pulling Cabal organization, from the wrath of the vengeful time-traveling sorceress Morgan Le Fay.

Casting Morgan Le Fay as the villain of this first story arc in the series turned out to be a wise decision, as her magical abilities make her a formidable opponent to everyone on the Dark Avengers roster (the Superman power-leveled Sentry included). As well, it adds an interesting dynamic to the story to know that, despite Le Fay wanting to kill the central characters of the story, her intentions are righteous in the sense that she’s trying to prevent the formation of the Cabal, and thus pre-empt the entire "Dark Reign" storyline.

The protracted battle sequence set on Dr. Doom’s home turf of Latveria that dominate most of the pages of this story, with art by Mike Dedato, is exciting and beautifully rendered, with some genuine drama throughout as the heroes battle the demons and monsters at the command of Morgan Le Fay.

Despite what could have been a confusing mess, the plot is well-structured, with wonderfully kinetic pacing that makes the book hard to put down. I particularly enjoyed the two independent sub-plots involving Norman Osborn and The Sentry and each's questionable grasp of reality. Both characters have always been a little loopy, but in this instance, Brian Michael Bendis puts these issues front and center, causing the reader to question both whether Osborn’s going to put on the Goblin costume again, and whether the Sentry has any clue just what he is or how much power he has at his command.

It’s a thing of beauty watching Sentry repeatedly perform the superhero equivalent to miracles, only for the next panel to cut back and show the Dark Avengers, his teammates, wide-eyed and quaking with fear over obscene power wielded by their unstable comrade.

My one gripe with the story progression in this arc was the fact that some characters definitely could’ve used so more air time for us to get to know them better. In particular, Daken (the dark "Wolverine") and Marvel Boy ("Captain Marvel") seemed to get the short end of the stick in terms of characterization, while characters like Ares were at least given a panel or two teasing the reader of future plotlines.

As is the norm for Bendis stories, the dialogue is a highlight.

While his forte seems to lean more towards the humorous and childishly immature, Bendis’ dialogue is, at the very least, always entertaining. Some characters, like Bullseye (“Hawkeye”) and Ares, are played for laughs, but on the other side we’re given characters like Moonstone (“Ms. Marvel) and Norman Osborn who speak with an uncommon level of measure and articulation. It goes a long way towards legitimizing Assemble as a serious story arc.

In other words, though you’ll sometimes find yourself rolling your eyes and snorting at the silliness of the some of the exchanges and asides, you’ll never be bored reading Dark Avengers.

In particular, Bendis’s use of Mac Gargan’s Venom as a comedic element is just about spot-on perfect.

All of the Dark Avenger’s series is pencilled by Deodato, whom I first took note of when I started reading he and Warren Ellis’ Thunderbolts series. Employing much of the same style he used there, and indeed throughout the past decade or so, Deodato’s art is that of a semi-photorealistic painting style, with an emphasis on detail and motion being the order of the day. His lines are fluid and borderline “smudged,” such that characters don’t so much have outlines as they do “silhouettes.”

Deodato was an excellent choice of artist for Dark Avengers, if not for his realistic style, which is wholly appropriate given the political nature of the story, then for his versatility. Whether the characters in his panels are fighting demons and dragons, or sitting in a TV studio doing an interview, everything is brilliantly rendered, and framed in an effective and cinematic fashion.

By the way, you’ve probably read it elsewhere, but I suppose it’s worth noting that, yes: Mike Deodato did in fact use actor Tommy Lee Jones as a reference for Norman Osborn. Some have complained that they find it distracting, but personally; I kind of liked it.

Come to think of it, I liked this comic. It was by no means perfect, but Dark Avengers: Assemble held my interest throughout with its roster of colorful, identifiable, and ultimately dysfunctional characters and the frequent shenanigans/interplay between them.
Posted by John "Zanziber" Rogers at 6:22 AM
Email ThisBlogThis!Share to TwitterShare to FacebookShare to Pinterest
Labels: Reviews