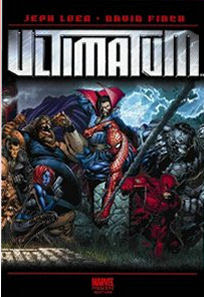 Billed as a miniseries in which big things happen, Marvel is hyping the final installment as a "series finale that will shock fans for years to come!" True enough of the first four issues. But, is shock, minus any significant characterization, worth the hefty price tag?

The afore-mentioned shock is partially due to an evil mutant (The Blob) cannibalizing a member of the Avengers (The Wasp), with her death being "avenged" by her husband (Yellow Jacket) when he bites the Blob's head off… Literally. And, though fans may justifiably expect to see Sabretooth (another evil mutant) rip a wing off of Angel (an X-Man) with his teeth, or Magneto snap the neck of X-Men founder Charles Xavier, what was the point of Dr. Strange being squeezed until his head exploded? This is not just shock, but schlock.

Far from being meaningful, the deaths of characters with such history behind them seem much smaller than they should be the fact that it took place in Marvel's much younger Ultimate universe, notwithstanding.

There are more deaths, caused by world-wide disasters engineered by Magneto, but it all feels forced.

The only good thing about the series is the incredibly detailed art of David Finch. His work crackling with energy and emotion, Finch could one day become a master of comic book art ... IF he can learn to be a bit faster, and tone down the super-model quotient among his female characters.

Ultimatum is only recommended for the most hardcore Marvel-head, and only if you may suffer heart, kidney or nerve damage if you DON'T get it. It's the cheapest form of prevention.
Posted by John "Zanziber" Rogers at 6:00 AM
Email ThisBlogThis!Share to TwitterShare to FacebookShare to Pinterest
Labels: Reviews