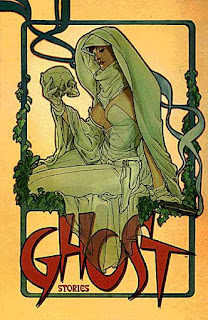 She's a ghost who doesn't know who she was. She doesn't remember how she died, or why. But she is compelled to learn who is responsible and take vengeance.

Ghost Stories collects the early stories that introduced the character to Dark Horse readers in 1993. She rode initially on the coattails of the publisher's existing setting of Arcadia and the masked vigilante called X. Soon enough, she was ready to stand on her own.

The insubstantial protagonist is difficult to see by those in her presence; when she does appear, she appears in a ghostly white leather with scooped cleavage -- as if seeing a ghost wasn't distracting enough! -- with a hood and mantle. She teasingly notes that only her constant concentration keeps her clothes from phasing through her and falling to the ground.

Those who see her, if they can tear their eyes away from her corset, will also notice a pair of big handguns -- the bullets that fire from their transparent barrels are all too real.

Her name, she learns, was Elisa Cameron, and she was a news reporter who poked into things she should have left alone. The details are sketchy, however; even finding her childhood home and seeing her parents and sister fail to ignite even a hint of memory. Her quest for knowledge and revenge is at times bloody, but her ghostly spirit lacks a conscience over such matters. She certainly has a bone to pick with men in general.
Posted by John "Zanziber" Rogers at 6:00 AM
Email ThisBlogThis!Share to TwitterShare to FacebookShare to Pinterest
Labels: Reviews