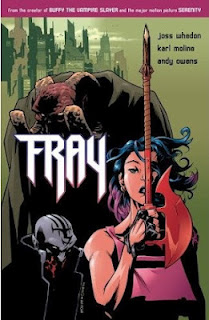 Hollywood script writer, Joss Whedon, has made a big splash with cult TV series like Buffy the Vampire Slayer (1997-2003). Anyone who's seen it and appreciates its themes and concepts knows Whedon clearly has comicbook geek in his blood -- and background -- so it's not surprising that, despite the smaller pay checks, Whedon has shifted over into comics from time to time. His recent writing of the comic Astonishing X-Men has garnered mainly great reviews, but a year or two before that, his first foray into comics was the eight issue mini-series for Dark Horse comics, Fray, collected in its entirety in a TPB volume.

Fray was a logical project for Whedon to test his comics scripting skills, because it's actually a spin-off of his most recognizable property -- Buffy the Vampire Slayer. It's written in such a way that Buffy fans will recognize certain references and themes even as it's sufficiently self-contained that you don't really have to be aware there ever was such a thing called Buffy the Vampire Slayer in order to follow it.

In the Buffy TV series, it was established that there have been many slayers over the eons, with Buffy only the most recent one. In Fray, we jump ahead a few hundred years into a dystopic, cyberpunkish future where we meet Melaka Fray, a street thief who not only is unaware of her calling as a Slayer...but doesn't even know what a vampire is! The Watcher's Council, which oversaw the Slayers for generations, has long since fallen into disrepair, so that it falls to a horned demon, Urkonn, to advise Fray of her place in the cosmic scheme of things, as a new plan hatched by vampires threatens demons and humanity alike.

In a world of occasional mutations, where Fray's mob boss employer is a fish man, the demon Urkonn makes less of a stir than you might expect, as Fray just assumes he's another mutated human. This is a world where the supernatural has long since become forgotten and no one has clued into the fact that the Lurks -- supposedly sewer dwelling junkies -- are really vampires. Fray, like Buffyy before her, is a reluctant convert to the cause, particularly as she mysteriously seems to have none of the Slayer's gifts other than super strength -- no prophetic dreams, no intuitive senses. She's also dealing with her own problems: she's a thief, her sister's a cop, and her brother was killed a few years before by Lurks. She's also acting as a kind of surrogate big sister to the disfigured ragamuffin Loo -- and in little Loo, Whedon pours all hhis impressive skills for mixing tones. She's funny, touching, grotesque, sweet, and heartbreaking -- sometimes all at once.

Though this was Whedon's first comic, he tackles it deftly enough. Maybe that should come as little surprise, as comics and film are similar mediums. His sense of pacing is good, not making the mistake of dragging out a scene too long. To fans of Whedon's TV work -- and Buffy in particular -- Fray is well worth seeking out. There's no dumbing down, or dilution of Whedon's talents. The quips are witty, the characters complex and multi-dimensional -- even without actors to say the lines, the characters live and breathe. Fray really does seem like what it is...a wholly legitimate off shoot of the Vampire Slayer mythos Whedon created.

It's a spin-off that Whedon couldn't have hoped to film before a camera -- not without a hundred million dollar budget. Chock full of flying cars, death defying leaps kilometres above the streets, epic battles, and a really big monster, Fray is Whedon's imagination untethered by mundane questions of budgetary considerations.

At the same time, despite having clever turns and surprise twists, for an eight issue series coming in at close to two hundred pages, there maybe aren't as many twists, or plot threads, as you might expect. The story stays pretty focused on Fray and its chief plot. The result is something that feels as though it could probably have been a movie with very little trimming or editing. Which isn't a bad thing at all, but for a multi-issue comics saga, one might have expected the plotting to be a little more Byzantine.

It's Whedon, himself, who has raised the bar so high on what fans might expect from him. Fray ultimately is a good read, with the obligatory mix of action and nuanced characterization, of horror and witty quips, of joy and pathos, with a few clever twists and turns, all building to a genuinely grand climax -- but the result might leave some Whedon fans saying: "yeah, O.K....now impress me". There are the trademark wry quips -- but though the lines that are funny, they're not always as laugh-out-loud funny as Whedon managed, say, in his Astonishing X-Men stories. And the very familiarity of Fray and her battles with demons, building to an apocalyptic showdown, means that, despite all the good bits, all the clever bits, it doesn't necessarily surprise. We've seen it before in various Buffy story lines (though fans might note that the axe Mel wields pre-dates its introduction into the TV series' mythos). Even the future Whedon envisions is pretty stock -- though the fish man is neat and, as is mentioned in one of the collection's introductions, you really can't go wrong with flying cars.

So does it need to surprise? Not entirely. Fray is entertaining, and keeps you turning the pages. And for fans -- even TV watchers who might not normally consider picking up a comic -- this is just as legitimate an extension of the Buffy universe as, say, the TV series Angel.

Artist Karl Moline was, apparently, not that well known when he was tagged to draw this, but he emerges as an accomplished talent right off the bat. There is a slight cartooniness to aspects of his work, but there is an energy and inventiveness to his pictures that blends well with Whedon's script, and he nicely captures the sense of this far future dystopia, with its towering skyscrapers and flying cars and its squalid, ground level ghettos, where the story demands a seamless mix of the real, the sci-fi and the supernatural. In all this he's aided by inker Andy Owen, and by colourists Dave Stewart and Michelle Madsen who go for a lot of effective earth tones of greens and browns as opposed to the more obvious metallic sheens you might expect for a future adventure. Granted, in some of the fight scenes, with the beheadings of vamps, Moline maybe could've toned down the graphics a bit. Instead, it's nudged slightly into mature readers territory.

The story ends with a reasonably satisfying conclusion...even as Whedon leaves things open for future adventures. Whether those adventures will ever materialize is the question. Melaka Fray made a brief appearance in the Dark Horse graphic novel, Tales of the Slayers (which featured short pieces about slayers through the ages), and guest starred in the Buffy Season Eight storyline, Time of Your Life -- but I don't think she's had any further, full length, solo adventures. If Fray should ever return for a solo mini-series, fine, but if she doesn't, that shouldn't really take away from what's here.

'Cause what's here is pretty good.
Posted by John "Zanziber" Rogers at 6:00 AM
Email ThisBlogThis!Share to TwitterShare to FacebookShare to Pinterest
Labels: Reviews