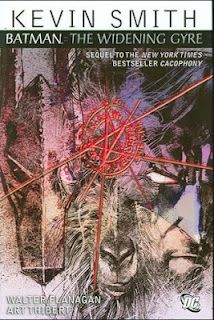 The Widening Gyre ends with a cliffhanger -- and one of the most shocking final-page spreads you're likely to see in comics.

The creative team -- filmmaker Kevin Smith and pal Walt Flanagan -- drew some criticism for their previous Batman tale, Cacophony. And, while I think some of the critics were unduly harsh, I have to admit that the story in Cacophony is serviceable without being spectacular.

But with The Widening Gyre, they hit it out of the park.

One of the strangest perks for this tale is, get this, a happy Batman. You don't get to see that very often. But Smith has given Batman alter-ego Bruce Wayne a very good life, complete with exciting romance, and it works far better than one might expect. I mean, Batman has to be grim, right? Not so. This works.

So, the romantic-minded of Batman's readers -- at least, those who don't prefer him single -- seem to want things to work out with Selina "Catwoman" Kyle. Most other relationships in Batman's storied career seem flat, unoriginal, uninteresting. But Smith pulls Silver St. Cloud out of his sleeve, a character I've never seen as anything more than two-dimensional arm candy, and makes her sing. And let me tell you, it's a genuine pleasure to see this buried side of Wayne's personality come out to play.

Some critics complain that there are too many pages devoted to Batman's personal life. Me, I'm happy to see it for a change. It's a nice reminder that there's a man behind the mask, and maybe he deserves a good day once in a while.

Of course, this is Batman, so you know something bad is going to happen. And that's all I'll say about that ... except to note that The Widening Gyre ends on a cliffhanger, so don't expect everything to tie up neatly by the last page. To be continued, as they say.

Meanwhile, there's also a new hero working the streets of Gotham, the mysterious Baphomet, and I'll let you meet him on your own terms. Suffice it to say, he has a lot to do with Batman's recent good spirits.

Also stepping up his game is Flanagan, who was soundly criticized by many readers for his mediocre work in Cacophony. Nothing mediocre here, folks. The dude's been practicing.

The bad news is, the second book in the series isn't on the shelves just yet. I'll be waiting.
Posted by John "Zanziber" Rogers at 6:00 AM
Email ThisBlogThis!Share to TwitterShare to FacebookShare to Pinterest
Labels: Reviews