The Walking Dead Volume 14: No Way Out 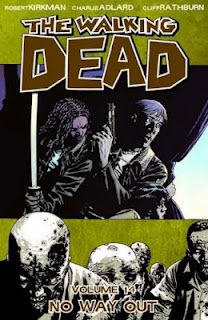 Title: The Walking Dead Volume 14: No Way Out

The safety of the community comes under the worst kind of threat when shots are fired which attract a herd of zombies up against wall that suddenly don’t seem as sturdy as everyone thought. When a section of wall collapses the outside world makes its presence known in the way that only a herd of zombies possibly can. Something has to be done, and someone must take charge, but how can this happen when stepping outside your front door means certain death? Rick must step up to the plate but when the bullets start flying again will he have what it takes...?

If things felt a little flat in Volume 12, and Volume Thirteen was all about setting things up for the main event, ‘No Way Out’ balances everything in some style. Kirkman promised us something big and he delivers on a scale like you won’t have seen since the big showdown in the prison.

The buildup is evenly paced and balanced nicely so that the payoff hits just the right note of adrenalin and fear. No-one is safe and this is a lesson you find yourself learning along with the rest of the cast. Things are fast paced and frantic as always and you can’t help but get caught up in what could be the death of one man’s dream. Death by zombie appears to be a fate reserved for the lower key members of both Rick’s group, and the community at large, and you could argue that Kirkman is afraid to go that extra mile here (despite the fact that he’s done it before) and really stick the knife into a character that you’ve grown to care about. I can see why you’d think that, I was thinking the same kind of thing myself in the earlier stages of the book. And then...

Robert Kirkman has had several volumes now to get us all used to the idea that he is the man to come to when you’re after really getting to know a character and then seeing them eaten alive in front of your eyes. He takes a slightly different tack here; there’s still plenty of bloodshed to contend with but this time he takes you right inside Rick’s head and gives you a ringside seat while he proceeds to really mess things up.

Rick has a really hard choice to make and only a matter of seconds to make it in. You’ve got to feel for the guy but the bottom line is that you know it’s a decision that Rick will make in a heartbeat. What happens just after that though...? I can’t give it away as you really have to see this one for yourself and experience not only your feelings but what Rick goes through in the aftermath. I sat there and just stared at the pages for what seemed like hours; I literally couldn’t look away and all credit to Kirkman and Adlard for delivering one scene that makes the entire book. In my last review I wondered if Adlard was growing complacent with this gig; I totally take that back now.

Lessons are learned but you can’t help but wonder if these have been learned too late on a number of levels. That uncertainty is only part of what will have me back for Volume 15 and beyond. What Kirkman and Adlard do in ‘No Way Out’ isn’t far off masterful, words fail me at what this book did to me while I was reading it.
Posted by John "Zanziber" Rogers at 6:00 AM
Email ThisBlogThis!Share to TwitterShare to FacebookShare to Pinterest
Labels: Reviews