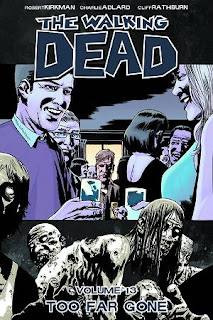 Rick and his band of survivors have settled into community life but some things still don’t feel quite right, whether it’s the fear of going back outside the walls (there’s work to do out there) or the fact that certain residents either have dark secrets or are helping others to keep theirs.

Rick sees the community as perhaps the best chance anyone has to live a halfway normal life in this new world; the question is what he is prepared to do in order to maintain things... Rick used to keep the law as a police officer, now it looks like he might be taking it into his own hands, will anyone stand against him?

Yet again, Kirkman had me thinking in one direction only to turn things round and really hit me with stuff straight out of left field. Rick has been slowly going off the rails for a little while now (and who could blame him really?) , and I thought this was going to culminate in his becoming the one man who has caused him the most pain up to now. Who knows, this could still happen but not just yet. Kirkman’s ‘man on the edge’ is still clinging on despite a growing tendency to lose it in the most violent ways and it’s going to be very interesting to see if he still keeps trying to do the right thing as the series progresses further. It could still go either way but what we have in the meantime is a well fleshed out character whose decisions cannot help but reverberate in the community around him.

It’s not just Rick either, it’s very interesting to see how the others react to life in relative safety and Kirkman cleverly swaps things around so that there’s a fresh slant on people that you think you know well by now. You really get the impression that people had to dig deep and be people other than who they really were during their time in the wilderness and this becomes a fresh way of looking at established characters. People whom you thought would be cool with stepping outside those gates would suddenly much rather be safe behind closed doors...

If this wasn’t enough, we finally get to find out what’s been going on behind some of the closed doors in the community. The big confrontation was perhaps signposted a little too clearly, in Volume 12, to be a surprise but you can’t deny the power that goes with it. Kirkman does moments like these only too well and he’s on form again here with a couple of moments that made me gasp at what was happening. Special mention has to go to Charlie Adlard for showcasing the sheer intensity of physical confrontation with using any color in the artwork at all. That lack of color seems to push the aggression to the surface even more.

While Rick is finding his place in the community, events are happening outside that  will not only solidify his position but also hint at something huge happening in Volume 14. It’s going to be just like the prison all over again but this time with an entire city full of zombies...Kirkman knows when to leave people hanging and now I cannot wait to crack on with the story; this could be the moment when Rick falls one way or the other.

I deliberately haven’t said a lot about Charlie Adlard’s art because; well... what can I say that hasn’t been said already. Adlard has made art duties, for ‘The Walking Dead’, completely his own and you just can’t see that changing. That could be why some of the larger panels are missing a little detail, complacency or is that just common practice? I don’t know...

‘Too Far Gone’ bumps things back onto track nicely just when I was wondering what would come next and has whetted my appetite nicely for Volume 14. The long wait begins again but at least it begins on a better note than last time round...
Posted by John "Zanziber" Rogers at 6:00 AM
Email ThisBlogThis!Share to TwitterShare to FacebookShare to Pinterest
Labels: Reviews