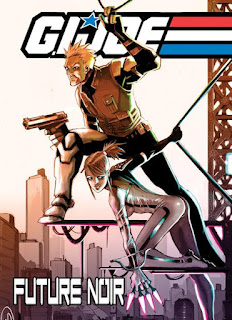 If you follow comics or even just G.I. Joe, you’re likely aware that IDW Publishing has been holding the comic license for Hasbro's long-standing toy-line for a few years now. In that time, they have not only published several new Joe titles of their own, but they also continued where the Marvel's fan-favorite series left off. Future Noir is represents the former as it is Hasbro and IDW’s effort to introduce the highly trained special mission force into the realm of manga.

The Joe team for this tale has Duke leading Roadblock, Scarlett, Sci-Fi, and Helix while General Hawk is hanging out at headquarters. The silent ninja, Snake Eyes, is not a member of this Joe team. However, he does leave his mark in several panels. He is accompanied by the Hard Master and the rest of the Arashikage Clan.

Some of the more interesting changes deal with Sci-Fi. His natural legs are gone, although he does possess a set of legs to attach to his lower torso. At one point, he attaches to wheel to move around on. He also seems to possess some sort of visual transformation that allows him to examine a specimen he finds. The details of this are not explained, so the reader is left to believe that he was a victim of Cobra’s malevolent plan.

The story takes place in Japan as our small unit of Joes takes on the Cobra organization headed by King Cobra. Cobra had been killing then abducting people and sacrificing them to serpent gods. The plot sort of drags as the team investigates Cobra’s evil plans. Fans will recognize a small subplot as Serpentor shows up later and takes over as leader. However, this takes place much too late in the book to have any effect and appears to only tease readers for another story that won’t be happening.

If you are looking for some of that Joe vs. Cobra action we’ve all loved over the years, you won’t find it here. After the initial shoot-out with “insurgents” as they were called, most of the action from there involves the team battling some of Cobra’s monstrous creations. One of those fights has them engaging a giant snake in the middle of the city.

King Cobra, or Cobra Commander if you choose, is not without his followers as he has a loyal legion of Vipers. They all have a uniform look (as they should) consisting of bald heads and long jackets. The evil entity isn’t short on star power either with Baroness and Dr. Mindbender getting in on the action. Nemesis Enforcer, who made his debut in the 1987 Joe movie, makes a surprising appearance here.

The G.I. Joe franchise has maintained its large fan-base over the years due to several reasons, one of which is the extensive roster the team has built. But, as many readers would likely prefer, a smaller group of characters prevents a story from becoming too packed and unfocused. With a smaller group, you can explore their personalities better than with a larger squad. However, you really won’t get that too much here. But we do get a glimpse at several connections between members of the team.

This edition of Future Noir collects the two volumes, previously published individually, into one book. Andy Schmidt handled the writing duties and Giacomo Bevilacqua took care of the art. Robbie Robbins and Dave Sharpe lettered this Joe tale. Upon handling the book, you’ll notice it doesn't read as manga typically do. It reads in the more Eastern fashion of left to right. My guess would be the creators decided against the standard presentation to entice Joe fans to read manga, but maintained the visual style in hope that manga fans would try an American property. The latter group will be right at home as Bevilacqua’s style matches that which manga fans have appreciated.

I picked this up because I have been a longtime G.I. Joe fan and was curious about it receiving the manga touch. I wasn’t feeling the story at all and would not recommend this book. I am quite sure my love for the franchise is what carried me through this story.
Posted by John "Zanziber" Rogers at 6:00 AM
Email ThisBlogThis!Share to TwitterShare to FacebookShare to Pinterest
Labels: Reviews